Not many people, but there are glimmers of hope. Paul was up and down, but that’s what happens when a star gets no help. Paul isn’t an Iverson or McGrady type that can create his own shot when his teammates are grabbing their shorts and daydreaming of buying rims for their Escalade. But he can take a sow’s ear and make a silk purse out of it. He is a winner and I defy anyone that thinks this team would be better off without him. If your team is hosed, you can trade a guy like Walker away for cap room, draft picks, and Raef LaFrentz. You don’t trade a guy like Pierce unless you are getting a McGrady, Duncan, or Garnett in return.

Other guys that showed life would be Marcus Banks and Jiri Welsch. Both are young, both are getting better, and neither backed down from this challenge. Did they do anything special? No. But I am looking for positives here. I think both should be solid players for us for a long time. Atkins wasn’t bad. He’s a nice plug for the PG position for the next couple years.

Mark Blount got his points and rebounds. He’ll get paid by someone this offseason. But he punched his timesheet and played for himself. I understand that he felt betrayed by Ainge and the Celtics. That’s actually somewhat understandable. On the other hand, he made it crystal clear that he was cutting his ties with the organization well before the season had come to a close. Is that the kind of loyalty and team-first attitude that he wanted from the C’s brass? Does he think he taught us all a valuable lesson on how to be a character guy? No. He pouted and played for himself. Fine. See ya.

Kept waiting for Ricky to step up and be Paul’s second fiddle. Never really happened. Maybe he’s right that the coaching staff never let it happen, but that’s a dumb move to talk about "the next group" while the current group is still in charge of the team in the playoffs. He’s been on his best behavior and shown real unselfishness during the regular season. However, if he’s going to respond with that kind of attitude when the pressure is ratcheted up a few notches in the playoffs, then maybe he’s not the answer after all. He’s got a very movable contract. I think his value might be at its peak at this point. 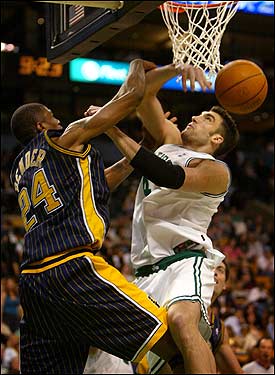 It was all ugly. Defensively, offensively, name it. Mihm was everything from ineffective to downright horrible. What does that mean to his future? Not much except that he won’t be as expensive to keep around another year. If he can’t improve some more next year, he’ll take a walk. McCarty was himself. Give this guy a nice role off the bench for 20 minutes a game (tops) and he’s a Tommy Point per night asset to the team. As a starter he’s a joke. Plain and simple.

I don’t think I even have the stomach to go into the coaching, so I’ll let hagrid’s rants take care of that. Carroll’s gone and hopefully Danny is working the phone with Mr. Westphal as we speak.

So what does that mean? Well, we’ve got a whole offseason to ponder that, but as I mentioned before, this series was valuable in part to evaluate the hearts of the players we have. Keepers include Pierce, Banks, Welsch, and Atkins. Everyone else is expendable. A better coach should be able to get more from several of these players. Hopefully before that happens, Ainge can get some more FOR several of these players. If its me, I’m shopping Davis and Yogi’s expiring contract for an impact big man. I know; easier said than done. But it’s a good plan A. Clearly Danny has his eyes on Abdur-Rahim and Brent Barry. That works for me. That’s not going to be an easy get though, so here’s hoping he has a plan B, and C, and D…