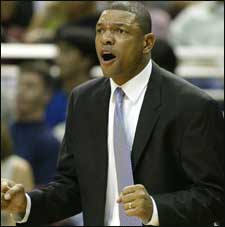 Great, I do all that research on Westphal and get my hopes up and they pull the switcheroo on me. Doc was the first guy I thought of back when O'Brien stepped down mid-season. Somehow I didn't think we could even get him. From what little I know about him, he sounds like a good rah-rah guy. Hopefully he can get the X's and O's part down too. I get the feeling that Danny is going to want to surround him with his own guys as assistants. Don't be too shocked if DJ, Hornacek, and/or Avery Johnson end up on the sideline too. It will be just like the good old days when Danny was playing. Then again, I thought it was a slam dunk that it would be Westphal in place by the end of the week. I guess that dunk was rejected by Danny like Blount was by Al Harrington. Here's hoping this Doctor has just what it takes to "cure our ills." ...yep, I'm already sick of that. This is going to be a long year of bad cliches.