Share All sharing options for: C's vs Nuggets: 99-100 - Tough Loss on Home Return

The pre-game interview with Doc indicated that he "was concerned that the team didn't look very good/sharp at the shoot around this morning". You'll come to read, his concerns were legitimate, at least concerning the bench, particularly in the first half.

First play of the game, the C's went right into the post to Blount, who pumped faked Camby to get to the line. Paul Pierce came out ready to play with 5 quick points and a nice up the court pass to a hustling Raef LaFrentz, who scored the layup.

This was a half that neither team had any issues pushing the ball up the court, as Denver also likes to run. The problem was, there was a plenty of sloppy play and missed shots.

Blount continued his good play with a nice cleanup rebound and score around the 4:32 mark. At that point, it was 17-14 C's.

Ricky Davis and Al Jefferson reported at the 3:09 mark and Waltah followed shortly after at the 2:02 mark.

We had entirely too many paratroopers(leaving thier feet on 1st ball fakes) on the team in the first, but on the positive side, the C's used the Pick and Roll very well, even if we didn't convert as much as we should have. At least we recognized the pass and delivered it well.

The second quarter was not that great. KMart, who sat the last few minutes of the 1st, came out and contributed to the first 8 points for the Nugs(4 pts, 2 assts), which prompted Doc to call a timout at 9:46, with a Denver lead of 32-27.

Ricky Davis collected a technical foul at 8:28 for arguing with the refs. The second team started the 2nd and by the 8:20 mark, it was time to get the starters back in. Blount and Raef reported in. We had scored 1 pt, were 0-3 with 4 turnovers. Not all the second teams fault, but Points in the Paint were 22-10 Denver.

Some random ugliness ensued until PP finally broke a 14 consecutive Celtics missed shots with a bucket at 4:24.

Pierce and Blount kept the C's in the first half, combining for 30 of the C's 41 points. PP had 20 first half points. Ricky Davis score the first points for the Celtics Bench players with .28 secs left in the half....Let's hope we get more contribution from the bench in the second Half or we're going to lose this one.

By the 9:00 mark, Jiri, PP, Blount and Raef had all scored. Only problem was, which coincidentally was the tale of the game, was that Denver kept answering many of our scores, often within 4-5 secs. 57-51 Denver.

At this point, I want to point out that GP was getting beat long by both Boykins and Miller(Although, giving GP his due, he hade 10 Assts). This happened far too many times for my comfort, although GP wasn't alone in that.

At the 7:51 mark, PP was called for his first foul. Let's make sure we note that it wasn't because he was shying away from anything, because he had several steals already and on the ensuing possession by Denver, he took and offensive charge.

PP and Reaf combined for another pick and roll at 6:33 to make the Denver lead only 61-56.

Aside note: Since I complained about the Clips clock keepers, I want to assess blame where it's due. On the above play, there was a kicked ball (clearly illustrated by the refs with the foot movement indicator) at the .14 sec mark on the shot clock. The clock never reset itself, even though at every level, when a ref signals a kicked ball the shot clock resets. Luckily for us, the C's scored 4 secs after they inbounds the ball.

The C's played intermittently with the run and you could tell when they did. Off a made Denver basket, the C's pushed the ball up the floor and RD scored quickly. A PP rebound and push up the floor resulted in the C's first lead since the 1st quarter 65-64 around the 2:30 mark.

The C's held the lead briefly until an alley-opp to Carmelo Anthony tied it at 68 at 1:52.

At the 49.2 mark, our mouth's got us in trouble again as GP was whistled for a foul and then got a technical immediately afterwards with a comment of "You gotta be sh***ing me?". 74-69 Denver after the FT's.

Jiri Welsch came back into the game for GP and helped get the C's 4 quick points(basket and asst).

The 4th opened with RD hitting a shot after Jiri took one, in the nose that is, from Carmello Anthony and drew and offensive foul for his pain. Sometimes you gotta take one for the team.

Jiri then hit a 3 pter to make it 82-80 with 9:36 left. Unfortunately, as was the case for most of the game, Denver immediately responded with Boykins hitting a shot. RD then re-responded with a 3 to put the Celtics lead at 85-83 and offered up one of the more memorable 3 consecutive possession trips of the game.

I couldn't understand why PP went to the bench at the 8:25 mark, until I remembered that his substitute, Tony Allen had seen much time since he started the 2nd quarter.

Al Jefferson continued to make strides when he hit another one of his soft hooks at the 8:00 min mark to make it 87-83 Celtics.

Tony Allen stole the ball passes up to RD who made a nice drop pass to Waltah for a soft dunk, but AGAIN, Denver went right back up the floor, scored and drew a foul when the inbounds outlet went to an open and cherry-picking Marcus Camby. 89-86.

Around 6:04, Camby then scored another easy bucket to make it 89-88. Waltah answered with a nice take to the hoop to make it 91-88, but as seemed the case in this game, we missed FT's when we needed them.

In the next few possessions, I have to say that BOTH RD and PP might be isolating too much and taking shots too early in the shot clock.

At 2:14 Blount had a great block on Melo to kill a Nugs break. Rd answered with a pull up jumper to make it 96-93 Denver. He then drove and score to make it 98-95 after Blount played poor defense and gave up an wasy score.

RD missed a 3 coming out of the TO, PP went to the floor for the rebound, the loose ball was tossed ahead to Melo, but was intercepted by GP, who was then fouled by Melo. GP made both Ft's.

After another timeout we played decent defense and Raef came up with another big rebound. Aside: his work on the boards was stellar tonight. He was probably a victim of 6 of the Nugs 10 blocks on the night, but he never gave up.

The C's called a TO, but PP couldn't hit the shot at the other end and the C's lose a tough one. 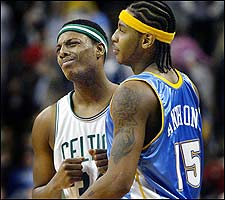 He had very good all around game, didn't really force things, had a good FG%, several steals, assts, etc. and was very much the team leader that Celtic fans expect him to be. (I'm sure someone's going to somehow try to blame his last second miss on Paul as the reason the C's lost the game and those people would be fools.)

Good All-Around game for him, with much better hands tonight and some post moves that surprised even me. Helped keep the C's in this one, when the bench was doing nada.

Kept the ball alive, particularly on the Offensive Boards tonight. Lot's of scrappiness and as I mentioned earlier, never gave up on plays.