Mail Bag - You Got Questions, We've Got Answers

Share All sharing options for: Mail Bag - You Got Questions, We've Got Answers

Which one player do you most strongly feel we should trade? - Ash

I'm a big fan of Raef and I think he's done a great job for us this year, but I'm picking him for his contract. I don't think his value could be any higher than it is right now, so if you can offload the contract at a reasonable price, you do it.

How can the Celtics improve their defense? - TJ Lee

If I knew, I wouldn't be telling you. I'd get paid to be an NBA assistant coach. On the other hand, I would be in favor of bringing in Patches O'Houlihan. "If you can dodge a wrench, you can grab a rebound."

Once and for all, can you clear up the draft situation for the Celtics next summer? I know they have their own, and the Lakers which is protected SOMEHOW until '08 when it's completely ours (right?). But wasn't there one from the Moiso trade to Philly, that's something like top-13 protected this year, then lottery protected, then free after that? I cannot recall. - Big Easy

I don't know actually. That's why I started this thread. I'm pretty sure the Moiso trade is off the books now though.

What is your impression of Ricky Davis? I see him as an exciting young scorer who is quite streaky. The man is an incredible athlete, but rough around the edges. What do you think the future holds for Ricky? Do you think he will become more polished and be the teams 6th man for the foreseeable future? Do you see him starting eventually? Or do you see him being shipped out sooner than later? - rickyfan

Reading Red's book reminds me how much he used 6th men effectively (Hondo, McHale, etc). Ricky playing in the 6th man role fits him perfectly. As long as he's happy with that role I'm loving him in it. I really find it hard to see what people don't like about this guy too. He seems like he just wants to have fun and play hard. Maybe the Mind Doctor was right about him. Sorry Peter May.

Jeff, what's with the cornrows? Isn't this really just the African-American version of the mullet? I mean, seriously, have you seen Rip Hamilton's hair? Inexcusable. - non-anon 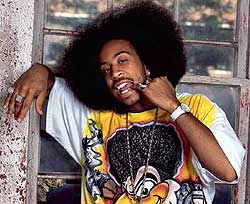 Speaking of Ricky and hairdos, I actually dig the fro. It makes him look even more like Ludacris. As for the black-mullet, I would tend to agree with the comparison. Everyone is welcome to their own taste of hair style. You just have to realize that when you wear the corn-rows, you are lumping yourself in with Spree, Snoop, and that whole crew just like mullet-heads are lumped with Billy Ray Cyrus and Kid Rock (didn't Dwayne Schitnus [sp?] sport a mullet?).

Rank the players, Who are keepers and who will have to go to get to #17. Don't vote for your fan favorites but give a well thought out position. - Steve

Good question. Anyone is expendible at a price, so I'll play this as though someone told me that we they were going to eliminate an undisclosed amount of players on my team. I'll rank them as though I had to determine what players I would want to "keep" on my team over the others.

1. Paul Pierce - like him or hate him, he's still our star and best player. With the exception of Payton, all the other players on this team can only hope to someday get this good. Period.

2. Al Jefferson - he's got the best shot at being better than Pierce.

3. Tony Allen - some might be surprised to see him this high so early - but I'm sold. Hook, line, and sinker. He's everything I had wished Kedrick Brown would be and more.

4. Gary Payton - I don't think you can put a value on what a pure point guard brings to a team. Even if I risk losing him as a free agent, I'd keep him over all the rest just to have that shot.

5. Ricky Davis - 6th man of the year - we can only hope he keeps winning it year after year

6. Mark Blount - yes, nobody is a louder complainer about his rebounding and bad hands, but good centers are really, really, hard to find. And he's pretty good.

7. Delonte West - earlier this year I'd have Jiri in this spot, but he's not impressing me much lately. I don't have much to base this on, but between the few games I've seen him play and the raving of the coaching staff and others, I think he's a keeper.

8. Jiri Welsch - Still a solid player who can shoot the deep shot. Needs to either become more aggressive or become an assist machine (or a defensive stopper). He just doesn't rise to the top in anything.

9. [tie] Marcus Banks and Kendrick Perkins - both are projects, and both could be invaluable to us if they pan out. If pressed to chose, I would likely take KP because he's younger.

10. Raef Lafrentz - that contract is just killer and as good as he is, I think you could fill his shoes with a cheaper option. He'll have to make way for Al someday anyway.

11. the rest are interchangeable

Jeff, What do you feel would be a healthy expectation to place on the

overall success (outcome) for the 2004/05 Celtic season? Shouldn't I keep

thinking these guys will do well? - C-Bill

I can't tell you how to root, you need to go your own way. As for the expectations, I would say a high bar is winning the Atlantic with a better-than .500 record. Its not much, but it's something to shoot for.

If you had to compare each Celtic to a Hollywood actor, who would it be and why? (Jeff, figured I'd give you a question that would allow you to REALLY rip off

Ricky = Ludacris (as stated above) for hair, style, attitude, etc.

Gary = DMX because he's hard core when he talks, but seems like a big softy on the inside

Tony Allen = Omar Epps just because he's played some sports roles and I'm such a big Tony fan. Omar has those piercing eyes that would just win over the audience.

Doc = himself - he's smooth on the camera, he could pull it off

I have 4 questions (you said any topic so I chose 4). (1) What do you think is the main reason(s) big men coming into the league, or in HS or college, don't try and develop a true hook shot, because if it is done correctly can be very difficult to stop? (2)If we accept the fact that the Celtic defense is lacking (too many points and too many easy buckets), is that failure based upon not enough focused effort, not enough talent/speed to get execute this type of defense (meaning big men being up top chasing guards sometimes and thus not getting back into position in time underneath because they are not quick enough),or is it simply a bad defensive approach altogether that needs to be changed. (3)How many seasons realistically will Doc and Danny get to bring this "plan" to fruition? And let's assume that we never move past the 1st round of the playoffs this year? (4) Which will happen first - Kung Fu the TV show makes a comeback, or the Celtics get cheerleaders. Thanks Jeff and Happy New year. Peace - Mitch "Master Po" Hylton

1. they think it makes them look like a pansy

3. 3 - that should be enough time to make us "contenders" - if we aren't winning a lot next year, then I'm gonna get fired up

It is no secret that most of the Celtics losses are due to poor or absent defense. Most of these games are lost in the fourth quarter when the startin five players are in the court. Lack of effort or poor coaching to blame? Pablo Curbelo M.D.

- It is all of the above. I blame everyone. The coaching staff gives lip service to defense like the old coaching staff gave lip service to the running game. They chose their emphasis and now we have to live with it. The players are doing what the coaches tell them, but they could be giving it a better effort.

What does Perk need to do to get consistent minutes? Doc mentioned after his 13 board game that he has been wanting to put him in the game soon anyways, but then burries the guy back on the bench the next game. - celtfan

Perk got minutes that game because Raef was hurt. I watched him closely that game and on top of the 13 boards he was all over every lose ball and almost got to several more balls. Still, he just needs more time in the oven. He'll come out alright soon enough.

I've followed Celt's pretty closely since Pitino and it seems that this year, to a degree, is more of the same. Lack of rebounding, inconsistent defense, poor leadership. How will this year be different? - Seventeen

The running game. That's what sets this gameplan apart from the previous regieme.

What do you think are the chances that GP's stock falls so low that we get stuck w/him come the trade deadline? - Mr. Green

Pretty slim, if you ask me. Even if he's completely useless on the court, he's still got an expiring contract.

What do the Celtics need to do in order to become competitive for a championship? - virginiafan

I get the feeling that he is not as untouchable as before. I don't think they'll give him away as a throw in, but he could make or break a deal.

We haven't seen much from Delonte except the terrific summer league performance, but we have already seen much of Big Al and flashes from Allen (the recent injury is unfortuante cause we really could have used him), and Reed.

Could this draft turn out to be one of the best drafts ever? Could any one or two or all three of Al, Allen, and West be among the top 5 players from this draft class? - Sun

Other than grabbing Paul 8 spots past where he should have gone, I don't think you can top this in our recent history. You would have to go back to Red's days (yes, that is a record 3rd Red reference in one post - thank you).

As for the top 5 from this draft: when all is said and done it could be Emeka, Howard, Livingston, Jefferson, and Iguodala.

Well, that's a wrap. Thanks for the questions. I hope you like it. This may be one of my longest posts ever, but only cause you guys are so long winded. Happy New Year!