Well, I guess I didn't exactly have the guts to make any bold predictions for this year, so its a bit hypocritical for me to denounce the pundits who took a stab in the dark. However, I did highlight the 10 Things To Enjoy This Year. So here they are again with updated notes:

10. Watching copy-cats attempt to bottle what the Pistons were drinking last year, and look silly doing so.
Wrong! Everyone looked at the Pistons and said, "Nah, that's too hard. Lets run and gun!" How it fares in the playoffs is anyone's guess. 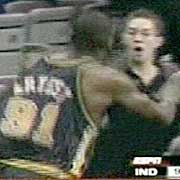 9. The inevitable Ron Artest meltdown. As well as the inevitable Pacers losing their toughness and identity when he's traded. It should be interesting to see which happens first. We'll see just how good Bird is.
Hey, I did call that didn't I? Bird missed his window of trading the aspiring artist ("Its about love!") but his coach made slik out of sow's ear and now looks to be our first round opponent. Still, I think Paul sleeps better knowing Ron is at home this year.

8. The reopening of Antoine Walker's floodgate of shots. Maybe we'll even get to see "the wiggle" again! I was always a fan of his, and now he can't kibosh our offense anymore. Everyone wins. (except maybe Atlanta)
I think he did the wiggle once in Hotlanta, but decided they needed to win occasionally for him to do it more. Now he's back where the wiggle started and he hasn't kiboshed our offense. So... everyone wins! (except maybe Atlanta)

7. Kobe without Shaq. All the glory, all the blame. Enjoy.
HA-HA (see pic)

6. Shaq without Kobe. I've always enjoyed the big, prima-donna lug, and now he's not a Laker. Ok, so he'll always be a Laker, but he's still fun. (with or without MJ)
He was fun to watch this year. And so was his new sidekick. Bonus points for making the East relevant again. Good times all around. Now I have to root against him again (they are in our conference after all). I just want him to give nicknames to Al and Perk before he retires.

5. The annual Wizards collapse. I really think they have a shot at being pretty good this year. I also thought that last year, and the year before...
Should have trusted my guts. I knew Eddie Jordan was the real reason for the Nets success (and that Kidd guy). I knew the Stack for Jamison trade was a slam dunk for them (Stack was a cancer on that team). I knew Arenas was crazy good, with emphasis on the crazy. This is a real team. With real weaknesses. Still, they are much like the Celtics in that they can take down anyone on any given night.

4. The Charlotte Bobcats: It's like minor league basketball. One of those guys just has to make a name for himself. But who?
Turned out to be Primo Brezec coming out of nowhere. Plus, Okafor proved that he's was indeed the most NBA ready big man to come out of College since Duncan. Good start. Now they need a point guard and someone (anyone) to play defense and they'll be another step along.

3. The Spurs actually doing what the Pistons did, only with the best player in the game. Yikes.
I'm standing by this. Spurs are your 2005 Champs. Book it.

1. New Jersey's return to the Lottery. Nuff said.
Something happened on the way to the cellar. An ownership group that quit on their team went out and bought a guy that quit on his own team. Instant success. Man, I loath this team and I have zero respect for Vince. Every time he drops 40 it reminds everyone what he could have been doing in Toronto. Pathetic. Part of me hopes they do make the playoffs just so they can get trounced by the Heat and lose the lottery pick.

Well, that's about it. These weren't necessarily predictions, but I was pretty close on some of the things I was hoping for, so I'll give myself a gold star for effort. Maybe next year I'll actually step up and lay out some guesses so I can be mocked and ridiculed later.