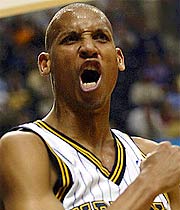 Enough already. All I've been hearing this morning is one pundit after another heaping on the lovefest for Reggie Miller. Well, I gave him his respect at the outset of this series and I sill acknowledge that he's one of the most clutch performers the game has seen (despite the fact that he's never won a thing worth mentioning). But that's over now. We're in full on hate mode from here on out.

This is a guy who has spent his career being universally despised because of his style of play, and now all of a sudden we're supposed to revere the guy because he's been too much of a pansy to ever put himself in a position to get hurt? I'm supposed to pat him on the back and say "way to cheat your way to another win?" Come on.

One play in particular keeps running over and over in my mind from last night. He's hovering out in the right corner behind the 3 point line. He gets the pass and Tony Allen lunges out to put a hand in his way but the whole time is a full foot or two to Reggie's right (towards the baseline). What does Reggie do? His FAMOUS (ie. even the refs know about this) leg kick routine. He goes out of his way to purposely trip Allen (risking injury as he flies into the stands), and Tony gets the foul call. Folks, this isn't just a bad foul call. This is an offensive foul. He created the contact! That is cheating. (and yes, I acknowledge that I should be just as mad at the refs for letting it happen, but one thing at a time)

I've given him his due, he's gotten his lovefest from the media, he even got another game winner. Now its time for him to go. Even when we win this series, the story will be about the heroic last effort of a fabled warrior, and the Celtics will be totally disregarded. Yes, I'm bitter.