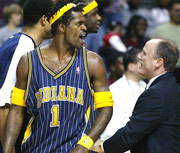 Stephen Jackson apparently sprained his knee near the end of game 2. He said on New England Sports Tonight that he's going to give it a go in game 3, but can't promise anything. Said there's nothing he can do about it till after the season.

In other news, Jamal Tinsley gave it a go in practice but said he won't be able to play in this series.

Update: News was confirmed on Pacers.com.

Jackson twisted the knee coming down after a dunk during the Pacers' 82-79 victory in Game 2 Monday night in FleetCenter. Though an MRI Tuesday showed no structural or ligament damage, Jackson was unable to participate in practice Wednesday.

He expects to play in Game 3 Thursday night in Conseco Fieldhouse but just how the injury will limit his effectiveness remains to be seen.