5 Things I Think I Think

Share All sharing options for: 5 Things I Think I Think 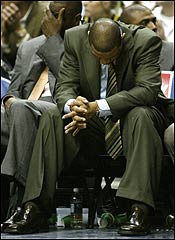 Stealing Peter King's format for a minute, I thought I'd share some quick thoughts (and I'm too lazy to come up with 10, so you get 5).

1. I think Doc did a fantastic job developing the kids. I even give him credit for realing in Paul, who had a similar "stranglehold" on the franchise that Antoine did. And I tried, I tried real hard to give him the benefit of the doubt. However, I'm coming to the conclusion that many of his critics are right. He's just not a great game coach. I understand many of the moves he made (staying with the vets in game 2, going with the youth in game 3) but they just haven't worked. As a result, some of the blame has to fall on him. Players have to play, but coaches have to put them in position to win.

2. I think Walker's ref-toss was a moronic move. First of all, when I looked at the replays of the O'Neal incident, I think O'Neal had every right to get upset about Walker's late hit. That said, both men should have been tossed and Walker was right to be upset about that. However, to fly off the edge like that is unprofessional and potentially very detrimental to the team. You don't lay a hand on the refs, that's a pretty basic concept.

3. I think we don't need to run isos for Paul to get him more touches. There are plays in the playbook to run staggered screens for him to get him open (the same way they do for Reggie Miller or Richard Hamilton). He even has options on those plays to make a pass if the shot isn't there. These are the kinds of adjustments that I wish Doc could make on the fly.

4. I think that despite the way this series is going, we have a lot of reason to be optimistic about the futures of Banks, Jefferson, and Perkins.