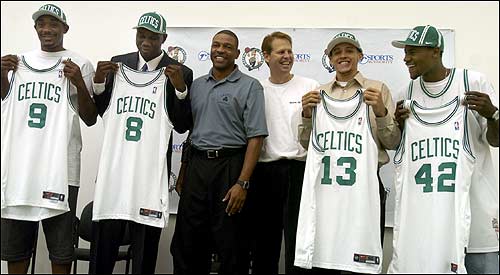 Time to take a break from my mythical wheeling and dealing and take my first look at the draft. I'll tell you right now, I have not done the research to make a solid call on anything yet. For the next 2 months, I'll be following Chad Ford's blog as he searches for the next Darko, frequenting NBADraft.net and DraftCity to get their latest mocks, pouring over strengths and weaknesses of players I've never heard of before, and digging for every last draft rumor under every rock I find.

And then, just like last year, I'll be completely surprised by what actually happens on draft night.

To give you a feel for how much I dig this stuff, I planned my bachelor party around draft night. So I had to quiet down the whole crowd to hear Stearn announce that the C's had chosen Al Jefferson. "Ok, why not?" I thought. "Maybe he can keep Kendrick Perkins company at the end of the bench." It was when Tony Allen and Delonte West were chosen that it really sank in. I have no clue what Danny is thinking.

We all know how it turned out and we are all thankful for it. This year we have another late first rounder to work with, as well as a couple of 2nd rounders (its going to be a long draft night for us). It should be a fun ride.

So, like I said, I have nothing terribly insightful to drop on you today. However, I can give you some initial biases and preconceived notions that I am starting out with.

1. I'm a Syracuse fan, I think Warrick will translate just fine the NBA and I'll root for him wherever he lands. Ok, anywhere except the Lakers.
2. I really don't see what people like about Charlie Villenueva. The eyebrows alone were a big turnoff for me, but the clincher was the blatant distaste that he has for defense. Pass.
3. I have similar feelings towards Taft who just seems like a selfish brat. However, he's one that might take off when properly challenged and motivated.
4. I have to wonder about Monta Ellis as well. The difference between a Kwame Brown and an Al Jefferson comes mostly down to maturity. I've already read several reports about his attitude. Red flag. Danny likes him though, so get ready for "promise" rumors to fly.
5. I always hate the promises. I seems to have worked for Danny in the past, but it just doesn't seem wise to lock into a guy (and then have that leak to the media). If I know about it, then so do the other GMs. This can't be good.
6. I am not too sure about Bogut, I'm sold on Paul, but Marvin Williams could be the best player to come out of this draft.
7. Unless of course Gerald Green lives up to the now-annual Tracy McGrady comparisons. Just how is Dorrell Wright doing these days anyway?
8. Another kid rising the boards is Martell Webster. I hear he can shoot. (this reminds me of when I heard about Shawn Marion rising up in the draft and all I could think to say about him was: "I hear he's a good dunker")
9. I'm always in favor of taking fliers on Euros in the second round and stashing them overseas. The concept didn't really work for Josip Sesar or Ben Pepper, but it didn't exactly cost us anything either.
10. If these are just my initial thoughts, wait till I really get going.