The Case For Standing Pat

Share All sharing options for: The Case For Standing Pat

Since Ainge has once again shot down the rumor which must not be named, lets take a quick look at the case for standing pat. 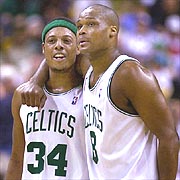 First of all, everything is relative. When I say standing pat, I mean not trading any major pieces and going in the current direction. Gary Payton is gone. Blount I'm sure is available for a song, but will likely stay. Wyc has said that Danny has the green light to use the full MLE. We have 3 draft picks in the upcoming draft (2 second rounders). Walker's best option is still to resign with the Celtics. Oh yeah, and we did win 45 games last year, winning the Atlantic Division.

So consider that even now (before the draft or FA period), we are 2 deep at every position. PG - West/Banks, SG - Davis/Allen, SF - Pierce/Reed, PF - Walker(if resigned)/Jefferson, LaFrentz/Perkins. Not a bad lineup really.

Consider that the Young Guns are not as green as they were a year ago. Last years rookies have a full year under their belts. Perkins is now a third year player (who's still younger than many of the guys in the draft). Reed has benefited from practicing against Pierce every day and will contribute next year - especially on D. Delonte didn't even get going last year. The older Tony gets, the more focused and better conditioned he'll be. Al? Well, would you like to put a ceiling on what he could do? Didn't think so. Basically, if we conservatively say that the whole group will be 10% better this year, that would be huge for this team.

What about the attitude? Well, if Danny and Doc are stressing that from day one of camp, hopefully there will be some strides forward in that regard. Given another year of male bonding, who knows how well this team could gel. Also, while Payton was a favorite of mine, even I have to admit that he was a bit of an untouchable. In other words, the stories of the coach calling a play in the huddle and Gary running a different one are not that hard to believe. Bottom line is that Doc, in a way, was probably intimidated by the sure Hall of Fame point guard. Take that away, and you have more discipline at a critical position.

If we bring back Walker, that too helps the attitude. Despite what we see with him and officials (not just the shoving incident, but all the whining and pouting), everything I hear about Walker from those around the organization is that he's a class guy all the way. Witness the fact that he took the younger players to Vegas after the season ended. He didn't have to do that. He could have treated the whole situation like he was a short timer and be done with it. But he goes the extra mile, and I think his teammates appreciate that about him. Not just Paul, everyone.

And I haven't even gotten into the free agent and draft picks we'd be adding.

I'm not even going to get into Blount as he's been trashed enough on this site. And there are plenty of flaws in this case for standing pat. Walker's effect on the offensive flow could be more bad than his leadership is good. The young players have as good a shot of getting hurt or turning out to be fools gold (remember Jiri?) as they do being a lot better this year. Doc has been tuned out before (in Orlando); who's to say it won't happen again - especially if he can't get on the same page with his star player?

But offseason is a time for educated guesses sprinkled with optimism. If we stand pat and stay the course, I don't think that will be so bad. One or two of the Young Guns could make the leap to young star and we'll be just a few pieces away from being contenders. Who knows? It's not the only path we could choose. We will be looking at trades all offseason and up to the trade deadline. But some of the best trades are the ones never made.