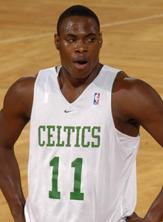 Oh how the mighty-talented have fallen. Marcus Banks was Danny Ainge's first draft pick ever and now, according to Gabe Kahn, he might just be in danger of not making the team. Now, this seems like a stretch, and I'm sure even Gabe would point out that this would be a last-resort sort of thing. However, the fact that it might even be considered is pretty shocking.

Obviously the team would prefer to see him blossom this year, and if he can win a job as a starter or even the primary backup, that would be the best case. However, one issue seems to be his attitude and maybe even his work ethic. If that is true, then the trade for Dickau and the signings of Greene and Bynum must be intended to light a fire in his belly. The message is clear. Nobody is handing you the job Marcus, lottery pick or not.

In fact, if he does have an attitude problem, then if he can't beat out Dickau or West, then is it worth it to keep him as just the 3rd point guard option? The team is very, very high on Orien Greene and seems to like Bynum as well. If the only reason you keep Banks around for is his defense, I would point to Greene and say "he can do that too." And if the C's really have lost this much faith in his playmaking, then you have to consider moving him.

Ok, then trade him to get some return for him, right? I'm sure that is an option that is being discussed. However, according to Gabe, the team cannot get a first rounder for him from anyone, and that includes the Lakers. They could probably get a second rounder or another undesirable player in return for him. But the obviously don't need more players, and you could argue that they have plenty of 2nd rounders.

Essentially it becomes more valuable to have a carrot (or a threat) motivating a former lottery talent than it would be to simply get a second rounder for him. Marcus is in the last guaranteed year of his rookie contract. The team could cut him, eat his salary this year, and save on the two team option years remaining.

So there it is. Baring any more moves before or during training camp, we will see Woods waived and one more player waived. It could be Bynum, it could be Borchardt, and amazingly enough, it could even be Marcus Banks.

Update: Ok my math is off. I guess Woods plus two more players need to be waived.

Update 2 - Gabe's Addendum:
A lot of people have written in asking about the logic of cutting Banks outright instead of trying to get even a 2nd round pick for him. I think that most would agree that many teams would give up a second rounder for Banks. But here's the thing: According to what I've heard (and you can continue to agree or disagree with the thinking here), the C's feel that what they can get out of a scared, motivated and ultimately coachable Banks will be worth much more than what they could get for him in a trade. They believe that the issue is NOT with his talent, but rather with his head and his ability to listen to his coaches. They are hoping to get him to play like a first rounder by hanging the threat of cutting him over his head. If he responds, then this threat (empty or not) will have given them much more than Marcus' current trade value. If it does not work, they'll be asking themselves if anything will get him to play like they think Banks is capable of, and that is why they'd consider cutting him.