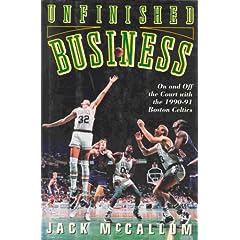 Taking a break from talking lottery, injuries, losses, lather, rinse, repeat, so I'm going to do something different today.

A few months back Jack McCallum from Sports Illustrated was kind enough to send me a couple of his books. Obviously heâ€™s looking to promote the new book about his behind the scenes travels with the Phoenix Suns called ":07 Seconds Or Less." Iâ€™m sure that is a wonderful book and I would probably be enjoying the current Suns team (that just had a 17 game win streak broken last night) if I were reading that book right now. Thatâ€™s probably the smarter thing to do. Instead, because Iâ€™m obsessed with the green and white and because all longtime Celtics fans live in the past, Iâ€™m reading his older book on the Celtics. Specifically the 1990-91 team. It is called "Unfinished Business."

It is an excellent read because it really brings the memories flooding back and provides the behind the curtain access that really adds a third dimension to those memories. It takes place during a time when the Big Three were getting old but there was an effort to infuse some young legs in the form of Reggie Lewis, Dee Brown, and Brian Shaw. Red was giving up power to Dave Gavitt but still had final say. The taste of Championships was still on the lips of the players yet the need to look ahead and move forward was absolutely necessary to survive.

I read books slowly; not because Iâ€™m a slow reader but rather because I have the attention span of a 10 year old on a chocolate binge, so I read 2 or three very different books at a time ("To Have and Have Not" by Hemmingway is the other one right now) while keeping up with SI, ESPN the mag, and of course the daily papers online. So thatâ€™s a long explanation for the fact that Iâ€™m only half done with it, so I canâ€™t give a full review. Still, there's nothing else worth talking about today, so here it is.

What I wanted to share with you is a brief passage on Kevin McHale. He is by far one of my favorite Celtics, and not just because Iâ€™m a tall, dorky-looking extrovert. Long before he became one of the worst GMs in the league, he was an absolute force that dominated the leagueâ€™s big men (albeit in Birdâ€™s shadow). I loved his uncanny low post moves and I loved his uncanny wit. So this behind the scenes look is a gold mine of anecdotes and stories about Kevin. The following is my favorite so far just because it makes me laugh:

McHale is part of a group of Celtics making an unpublicized visit to a Childrenâ€™s Hospital:

â€œLet your spirit be your guide,â€ said McHale. Then he barged into the first room and immediately turned off the TV.

â€œOkay, no soap operas,â€ McHale said to the patient, a teenage male. â€œTheyâ€™ll fry your brain. Didnâ€™t your parents tell you that? He turned to the boysâ€™ parents, who were sitting bedside. â€œOh, that must be you,â€ he said. â€œIâ€™m Kevin, this is Mike.â€

As McHale moved easily from room to room, he received the news that someone in the hall had recognized Smith but not him. â€œYouâ€™ve got to be kidding,â€ he deadpanned. â€œThis is like the lowest point of my career.â€ He knocked on the next door. â€œOkay, you know who I am, right?â€ Back in the hall he bumped into Ford, who was leading another group through the hospital. â€œHey, Chris,â€ said McHale, â€œthe last kid wanted to know why I only played eleven minutes last night. What should I tell him?â€

A couple of the younger black patients were plainly uninterested in McHale and Smith.

The story goes on with a turn to a more serious mood...

Toward the end of the afternoon, Kleineâ€™s group came across a young boy, rendered almost bald by radical chemotherapy, sitting in a treatment room dressed in full Celtics regalia, hat, sweatshirt, green sweatpants. In his hand he held a Celtics pennant.

â€œHow longâ€™s he been waiting for us?â€ a nurse was asked.

â€œTell you the truth,â€ she said, â€œhe didnâ€™t even know you were coming. He dresses this way all the time. He just loves the Celtics.â€

Tears worked their way into the corners of Kleineâ€™s eyes.

â€œCan you believe that?â€ he said. â€œYou know, my dad died of this disease.â€ He shook his head. â€œBut these are kids. I guess this really puts basketball into perspective, doesnâ€™t it?â€