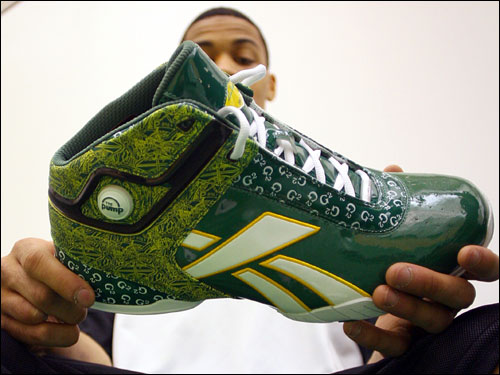 A little bird at Reebok told me that Gerald will indeed be pumping his shoes before each dunk, ala Dee Brown.Â  And yes, Reebok will be paying per pump.

For more details on his dunk preperation, see Shira's article from today's Globe, including this:

For that reason, no detail has been overlooked in his preparation. Following a morning shootaround last week, Green and Paul Pierce spent 15 minutes perfecting a bounce between the legs from the foul line. The ball must come off the floor hard enough to hit a spot on the backboard just left of the square, and with a certain amount of pace. With the perfect bounce, Green can collect the rebound for an easy dunk. After a handful of bounces, Green and Pierce discussed angles, speed, power, and timing in a way that would make a physics professor proud.

Also in the Globe:

Quote of the day goes to Celtics slam dunk contest representative Gerald Green. The second-year swingman was asked if he had anybody with the team helping him screen his dunks. His reply was priceless.

"A lot of people are, but I'm the GM right now. I make all the decisions on my dunks. I'm the Danny Ainge of my dunks right now."