What If We Get Durant?

Share All sharing options for: What If We Get Durant? 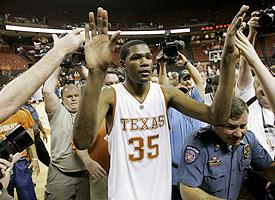 Monday we looked at what would happen if we won the lottery and landed Oden. Today, we'll see what's behind door number 2.

Memphis has tanked its way to a hold of the worst record, but even if we miss out on that dishonorable distinction, there is still a pretty good chance that we will get the 2nd pick. The Sixers keep getting unexpected wins like the one over the Phoenix Suns a week ago and the next 3 teams lead us in the standings by 5 or more games. Unless the Celtics start a winning streak that rivals our 18 game losing streak, weâ€™ll still likely stay in the bottom two records in the league.

Lets say that some team wins the lottery and plans to select Oden. The Celtics still have a great opportunity to win that second pick and take what may end up being the best consolation prize ever.

People (rightfully) bring up the draft of 10 years ago where we missed out on Duncan. Dare I bring up the draft from almost 21 years ago (1986)? Another 2nd overall draft pick was supposed to be the one that would take the torch from the Big Three and help them get a couple more titles before they rode off to the proverbial sunset. Instead, his premature passing marked the beginning of the dynastyâ€™s end. How poetic would it be to have another 2nd pick overall actually deliver that greatness to us and return the franchise to its former glory?

Is that too much pressure to put on a kid that young? Of course it is, but heâ€™ll face a similar pressure anywhere he goes. Everything Iâ€™ve seen and read about with this kid tells me heâ€™s a rare combination of freakish athleticism, amazing talent, and tireless work ethic. Oh yeah, and he seems to be a kid with a good head on his shoulders. As Simmons pointed out, there simply is no ceiling on what he might become. None. In fact, I think if we land the 2nd pick, Bill will have his first heart attack.

The comparisons that get tossed around the most are Kevin Garnett or maybe even Tracy McGrady (if I had a dime for every â€œnext-McGradyâ€â€¦). However, Iâ€™m going to go ahead and use LeBron as a benchmark. Not because they are all that similar in style of play, but rather because I believe Durant has the ability to make that kind of immediate impact that LeBron did. In fact, with the benefit of a year in college Durant might be a step ahead in his first year.

Like LeBron, the league hasnâ€™t really seen anything like Durant. His combination of length, grace, and offensive versatality make him a matchup nightmare the second he hits an NBA floor. If LeBronâ€™s learning curve is any indication, Durantâ€™s â€œstrugglesâ€ in his first year will be worthy of rookie of the year honors. Maybe by the second year heâ€™ll be playing his first of many All Star games.

Again, I have to pause and ask: Is that expecting too much from the kid? Absolutely! But he better get used to it. And it doesn't realy concern me.Â  Barring injury, the downside is that heâ€™ll be a very good offensive player. As good as he already is, thereâ€™s little doubt he's got star potential.

Besides, one thing LeBron did not have coming in was the benefit of an All Star teammate to take some of the pressure off and to tutor him on the court. Pierce could be that guy for young Kevin. Even though heâ€™s made noise about wanting to have a more veteran cast around him, Pierce has been very supportive of the younger players. He's not blind.Â  He knows that the kid could be something special very soon.Â  I think Pierce would do very well as Durant's mentor. Especially if the Celtics do make some moves to put a veteran or two around them.

Which brings us to the next point. If we do luck out and get Durant in the draft, the team will have an embarrassment of (potential) riches at the 3 position. Pierce, Durant, Green, and Allen if he comes back healthy.Â  In theory, Pierce and Durant can play together since Pierce has floated between the 2 and 3 positions all his career and Durant seems like a very versatile player. But what do we do with Gerald Green? Chances are heâ€™ll be the odd man out and we should be able to get some good value for him.Â  In particular if he isÂ paired with Theoâ€™s expiring contract.

Iâ€™m not rooting to get rid of Gerald and I actually am optimistic that heâ€™ll be able to give us a more consistent effort next year. But heâ€™s still got a lot of learning to do before he can reach his full potential. That is if he ever does. If you can get a veteran (but not too old) All Star for Gerald, then you know Ainge will pull the trigger.

Actually, a benefit to trading Green means not needing to trade the other young players on the team. You wouldnâ€™t get full value for guys like Gomes, West, Allen, and Perkins because nobody outside of Boston sees them as anything but good reserves. Put them next to or backing up the likes of Pierce, Durant, and another All Star, and they fill out the roster very nicely. You just have to hope that Rondo or West can thrive in the starting point guard role. Otherwise you could add a veteran point to provide some stability to the spot.

Sure, the top spot is preferred, but landing the 2nd pick would still be a dream for the green. Some would say it is even better than having to select first (and potentially making the mistake of passing on Durant or Oden). If all goes right, weâ€™d have 2 veteran All Stars, a soon-to-be All Star in Al Jefferson, a future All World in Durant, and a roster full of solid complimentary players to put around them. Youâ€™d even have Wallyâ€™s contract turning into an expiring deal after next season.

The near future could end up being very bright indeed.