Adande of ESPN has some telling quotes by Paul Pierce on a number of topics. 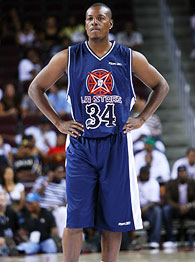 So what does he plan to do differently this season?

"Win more games," he says. "That's it. People know what I can do as an individual basketball player. The legacy is all about how many games you win, what you do as a team."

On the tradition of the Celtics:

The decline of the Celtics wasn't entirely his fault. He wasn't responsible for all the bad draft picks, questionable trades and curious coaching decisions. He was out with an injury for all but the final two games of the Celtics 20-game losing streak this season. But the fact is, the Celtics missed the playoffs the past two seasons on his watch.

"It definitely weighs on me," Pierce says. "This is not just any old franchise. This is a storied franchise, great. So many of the top 50 players come out of this franchise."

He sees the championship banners every time he comes to the arena. He notices when a Bob Cousy, John Havlicek or Bill Russell sits in the stands.

"I want to continue on what they did," he says.

"I just feel like this is our time, man," Pierce says. "I'll probably play [another] four or five years in the league. These last five years, this is going to determine what people are going to be talking about for the rest of our lives, as basketball players and off the court. I'm in my prime, these guys are in their prime.

"This is it, right here. This is the run. Everybody realizes it. We've got a sense of urgency. These are the years that people will remember when it's all over.