Share All sharing options for: Working Early And Often 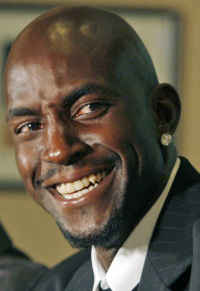 I believe this is Marc Spears' first article for the Globe.  He reports on Kevin Garnett's work ethic (something that I hope rubs off on the rest of the players).

Garnett is among more than 20 NBA players working out under the Abunassar Impact Basketball system at the Tarkanian Basketball Academy, but none may be taking it more seriously. For more than a week, the 10-time All-Star has been the first player to arrive for his six-day-a-week workouts. In fact, Garnett has been starting at 7 a.m. since arriving Aug. 27, and he began an hour later yesterday only because Joe Abunassar wanted his employees to have an extra hour of sleep on the holiday.

"I like my footprints to be the first in the sand," Garnett said.

Said Abunassar: "He's a [workout] freak and always has been. He likes to come in and get it done."

Also, we have word that Garnett will be coming to town to join his teammates already working in Waltham.

Celtics coach Doc Rivers would like his players to be in Boston for pre-training camp workouts by Sunday. According to Abunassar, Garnett is expected to arrive in Boston as early as tomorrow.

Celtics executive director of basketball operations Danny Ainge said Garnett and guard Ray Allen have been calling their new teammates to get in early for voluntary workouts. According to Ainge, 8-10 Celtics have been working out, voluntarily, at the Waltham facility on a consistent basis.