3. Rafer Alston - There's a part of me that's still surprised that he's the top point guard in Houston. Not as surprised as the Dream Shake, but surprised nevertheless. Actually I only brought Alston up to remind everyone of the time Boston ended Houston's win streak on TNT and Rajon Rondo stood his ground:

Still awesome. And yes if they had been at a night club Rondo would have been in trouble.

Catch more after the jump...

2. Carl Landry - Every year NBA fans get caught up in players who dunk with authority. I know I'm guilty of it. Bill Walker is the latest example. Although I would argue that over time Walker will win people over with his game. However, Landry is one of those guys that is not flashy, but can simply play. I love what he brings to the table.

1. Aaron Brooks - I like Luis Scola's game more, but I know what to expect from the Argentinian. Brooks is a mystery to me. Can he hold down the back up point position? When other people here his name do they think of one of the underrated quarterbacks of video game history? 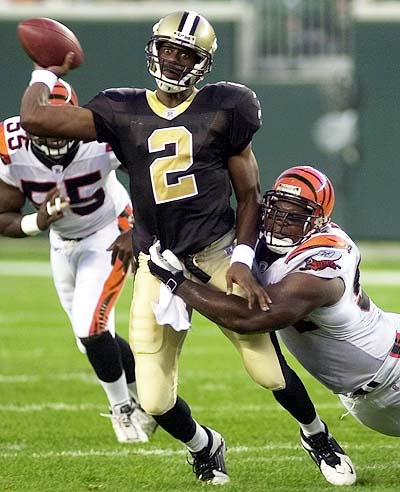 Ever since LeBron James rocked a suit at a preseason game in Manchester two years ago I've been a little leery of these tuneups. And by that I mean, I have no idea if Yao Ming, Ron Artest, and Tracy McGrady will even play. If Artest gets time, he's easily on that list. As a side note the Rockets put together an eclectic group of guys for preseason. A Von Wafer sighting!

3. Glen Davis - If Patrick O'Bryant continues to impress and emerges as the back up center, Davis will be in a bind. He needs to approach these games with a sense of urgency. He's in a contract year, is competing for time with Leon Powe, behind KG of all people, and does not appear to be in peak condition. Furthermore, Powe gets buckets, is incredibly intense, and is also in a contract year. Davis could be relegated to the bench.

2. Patrick O'Bryant - It's too early to get overly excited. But I'm completely on board with his signing. And I'm happy the C's are being cautious with Kendrick Perkins. It gets POB time and doesn't force Perk into contact too soon.

1. Tony Allen - I'm incredibly biased and tend to overvalue Celtics. Still, I believe that Allen, if physically and mentally on track, could make a sizable contribution to the C's this season. I'm looking for consistency from the former Oklahoma State standout that is all of the sudden entering his 5th NBA season.