To open up the 2008-2009 regular season, the Boston Celtics have taken care of business with a pair of home victories over Cleveland and Chicago, predicated off of their typical bullish defensive intensity. Tonight, the defending champs will face off against Larry Legend's Indiana Pacers in their initial road trip of the season, in which they'll complete early-week with a back-to-back setup against Houston and Oklahoma City on Tuesday and Wednesday.

The Pacers are not the same team we've become accustomed to facing. Jermaine O'Neal is no longer a member of the squad, as he was shipped to Toronto this past summer in exchange for a package highlighted by T.J. Ford and 17th overall draft pick Roy Hibbert.

This run-and-gun, perimeter-oriented team has adopted our favorite style of play - Obie Ball. With O'Neal being replaced by younger, more energetic players, this group should have the opportunity to flourish with one another as soon as this season. However, before they will have a chance to make any noise or gain any ounce of confidence, they'll have to come through the men in green at Conseco tonight at 7.

Celtics X-Factor: Close Out On Shooters
This Indiana Pacer team is young, rather inconsistent, and has some trouble on the defensive end. However, if there's one thing we can say about a Jim O'Brien team, it's that they are not shy about firing away from deep. This group in particular is more than capable of knocking down treys with the best of them, and if you fail to aggressively close out on the perimeter, you might be in trouble at Conseco Fieldhouse. The Celtics have certainly made a name for themselves over the past year on the defensive end, but it is very important that the green do not take this Pacer team lightly. Don't dare them and don't give them too much space.

Pacers X-Factor: Run
Indiana doesn't have a shot in the dark at taking down the champs in a halfcourt setting. The only way they'll have an opportunity to steal this game is if they make it a point to attack up the gut, fill lanes, and take advantage of their magnificent cast of shooters as trailers in transition. They've got the perfect point guard to run that style in T.J. Ford, and they've got a fitting coach to preach it. They've got to get it done against Boston. 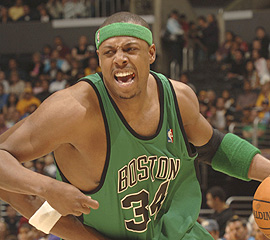 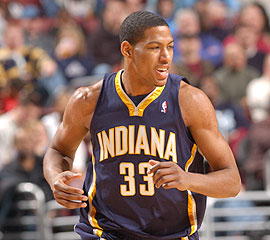 When you're talking about Paul Pierce and Danny Granger, one word to describe the two is "versatility." They can play multiple positions, shoot the three, defend the perimeter, scrap on the boards, finish at the rim, run the floor... you name it. Pierce is clearly more advanced in one-on-one situations, but Granger is no slouch of an offensive player himself. Look for these two to battle hard on both ends of the floor.