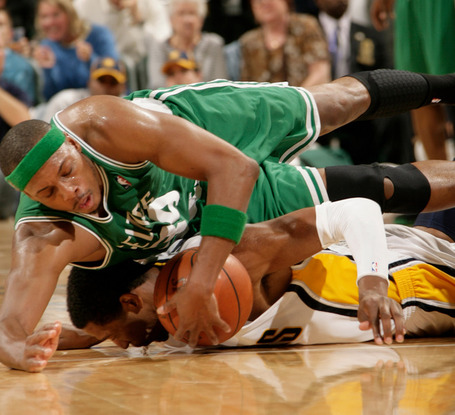 The home team shot an average of 44% from the field while the road team shot a measly 34.6% from the field.  To show how out of character this is, all of last season, the Celtics shot less than 35% just one time.

While the home team didn't set any records with their free throw shooting, they were considerably  better than the 60% that the road team hit from the line.

As for the key matchups, Paul Pierce finished with 15 points, 10 rebounds, 4 assists, 2 steals and 1 block while Danny Granger tallied 20 points, 4 rebounds, 1 assist, 1 steal, 2 blocks and 2 lost teeth.  This one could be considered a draw.

A few odds and ends:

Doc once again brought Scal out in the first quarter and this is puzzling although Scal at least contributed this time with 2 points and 3 rebounds in just over 8 minutes.

Leon Powe was his usual steady self with 9 points, 4 rebounds, and 1 block.  You have to love this kid.

Ray Allen struggled with his shot once again shooting 4-10 from the field and finishing with 10 points but he also pulled down 6 rebounds.  Eddie House struggled even worse shooting only 1-10.

Violet Palmer was one of the refs and she hasn't improved any since last season.  She is still one of the worst refs in the league.

There was one positive in an otherwise very ugly game for the Celtics.  The Celtics out rebounded the Pacers 52-48.

Hopefully this game was an exception and the Celtics won't be a Jekyll and Hyde team this whole season with one team showing up on the road and another showing up at home.  Let's hope they find their cohesiveness and defense before Tuesday  because it won't get any easier in Houston.