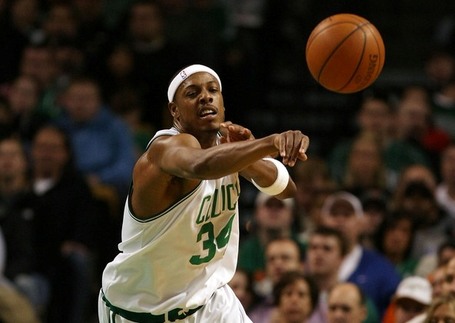 Ever wonder what the Celtics would play like if they all took one Ambien prior to tipoff? Well wonder no longer, we just saw it, and its awful! Note POB didn't take one, he's naturally sleepy enough.

The first half was in a word: ugly. The Celtics looked every bit like a team that played a game just 24 hours earlier. Pick your favorite analogy, but I'll go with flat as a pancake. Rondo was disinterested. Pierce did his best Antoine impression and missed not one, but two bunnies. Even a dorky face-off with Jermaine O'Neal couldn't get Perk going, on his birthday no less.

The second half continued in much the same, sleepy vein as the first half. Until KG lost his mind. The Celtics finally woke up (or aforementioned Ambien wore off) and made a contest of it. Garnett's "harrassment" of Calderon is easily the funniest things I've seen this young NBA season.

Maybe it just took 2.5 quarters for the Celtics to wake up, but thankfully they did. Pierce finally locked in and abused Kapono as he should. Again, Paul did great work with the second unit (Powe/TA) and brought the Celtics right back in it.

And once energized, the Celtics got very, very crushy. There have been worries about Paul's play to start the season. I think its safe to say....our Captain is just fine. I can't do it justice in a recap. Discuss below.