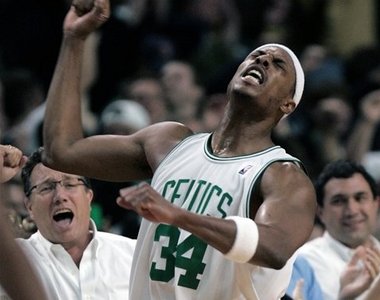 You know, I usually don't support Mark Jackson catch phrases, but it's time to bust one out.

"Oh momma there goes that man!"

Paul Pierce; that's right. The Truth. He did it again.

After yet another slow start to the game, the Celtics gutted it out and strapped onto the back of their captain to will them to victory. In fact, it was a fairly reminiscent sequence of events to Monday night's win over Toronto... except a bit sweeter.

Boston capped off the second half with an energy-filled 23-7 run and found themselves tied with Atlanta 51-51 at intermission. The third was up-and-down from both ends and resulted with just a one-point Atlanta advantage.

The fourth quarter was a hard-fought, neck-and-neck battle as well. The only difference is that Atlanta didn't have a reigning NBA Finals MVP in their possession. To our convenience, however, the Celtics did. Paul Pierce scored 11 of his 34 points in the fourth quarter, just two days after roaring for 22 fourth quarter points on Monday, and his final deuce couldn't have been scripted any better.

A Joe Johnson runner and Marvin Williams corner three put the Celtics down one with just over seven seconds remaining on the clock. Then it happened. With 0.5 seconds left, Pierce buried a corner jump shot in the face of Al Horford to ice the game 103-102, snap Atlanta's streak, and lead the Celtics to a six-game winning streak of their own.