Share All sharing options for: 15 Games In - State Of The Team 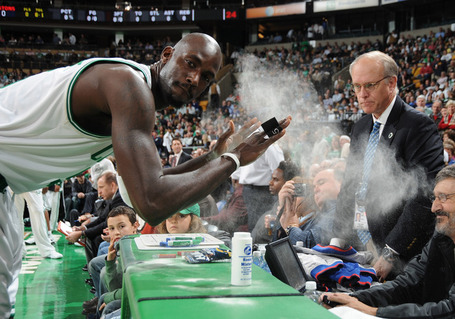 Most years I try to follow a 15 game rule. Meaning I don't judge the team till we have a good enough sample size and 15 games is as good as a number as any. Two years ago I ditched the rule early because the team was that bad. Last year I ditched it because the team was that good. This year seemed like a good opportunity to bring it out again. In addition, it helps to compare this year's start to last season's beginning.

Last year after 15 games the team was 13 - 2. This year after 15 games the team is 13 - 2. Nothing to complain about there. There was some hand wringing by fans early this season because the team dropped the third game of the year and played from behind on a number of games. Still, comeback wins still count the same as blowouts and the team has putting teams away earlier in games as the season has progressed.

My math may be fuzzy but by my count the margin of victory through 15 games last year was about 16 points per game in the wins (helped a bit by a 45 point thrashing of the Knicks). This year it is down to 10 points per game. Should we read anything into that number? (my thoughts after the break)

I wouldn't be too concerned about it, but when you combine that with the number of slow starts and come from behind victories, I think it tells you a little something.

The general feeling I get is that last year's team absolutely had to win every game like their lives depended on it. This team really, really wants to win. It is a subtle difference but it is there.

They know they are the best team on the court every night and expect to win. When teams come out swinging a little more than expected, they swing back and eventually put them away like they should. It just isn't that desperate hunger to blow the doors off of teams from the get go.

Is that a problem? I don't think so. You could make the argument that they kind of burned themselves out last year and had to stumble through the playoffs a little tired. The team isn't going 100 mph 24/7 anymore and maybe that isn't such a bad thing. In fact, the team is getting to practice fighting through adversity without picking up losses.

The only fundamental worry I have is that this team could morph into the Detroit Pistons of the last several years. One that does just enough to coast into the playoffs with the 2nd or 3rd best record, makes some noise in the playoffs but ultimately fails in the conference finals. I'm convinced that those Pistons teams thought they could flip a switch at any time and win when they wanted to.

I don't think the Celtics are at that point now, and there's no specific reason to worry that they will, but I need something to worry about don't I?

Speaking of which, what happened to the team missing James Posey? So far, the defense hasn't suffered one bit and the bench players have taken turns stepping up with timely points to help us win games. The true test will not come till the playoffs, but so far so good.

Another storyline was the new faces. So far we've gotten exactly zip out of Patrick O'Bryant and the rookies. It is early yet, but the bigger stories have been the rebirth of Tony Allen and the resurrection of Brian Scalabrine.

For those not paying attention, Tony is now our 5th leading scorer and his attack-mode drives to the basket are a joy to watch (and something we were missing too often last year). Just seeing Scal on the court contributing and getting his confidence back has been one of the biggest surprises of the year.

On the downside, the team seems to turn the ball over way too much. Maybe they are just taking a few more chances because they know the defense can cover for them. Maybe they practice defense so much that they feel less comfortable on offense. Maybe working the bench players into bigger roles is throwing things off. Who knows? I just hope they get it together more as they get more practice.

Also, the free throws are an underlying issue that may come back to bite them if they don't improve. We haven't seen a Hack-a-Rondo strategy just yet, but close games sometimes come down to the freebies.

The last worry is that the team may be walking that line between "swagger" and "cocky" a bit much for my taste. Then again, when you are the best, you have to walk that line and sometimes step over it when necessary.

So that's it for "concerns." There's always something to nit pick and work on, but for the most part this team is a force. Once again they are at the top of the league in defense and right at the top of the standings.

The Big Three are doing what they do. KG is the driving force of the defense and maybe hanging out on the perimeter a little more, but nothing to be concerned about. Ray Allen has been hot and cold, but always seems to make up for bad shooting nights with heady play off the ball. Paul Pierce is taking his rightful place among the game's best without taking away from his running mates - a difficult balance to maintain and one that he doesn't get nearly enough credit for.

Rondo and Perk have been predictably up and down, but seem to be picking up momentum as they go along. Eddie, Leon, and Baby all know their roles and play them very well.

I look at the landscape of the NBA and I still see everyone else looking up at the Celtics. Sure, the Lakers have improved and are doing great. But just with the Celtics, it isn't how you start, it is how you finish the year. The Celtics are the defending Champs and so far they are playing like it.

After 15 games I feel comfortable saying this team has what it takes to repeat. Or said another way, "they are who we thought they were!"