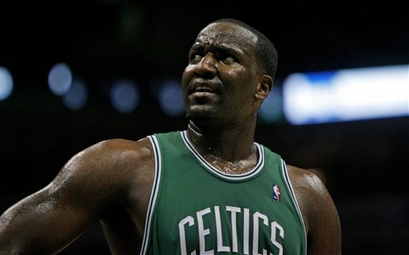 Kendrick Perkins has taken some important strides over the last couple of seasons.  The Celtics' sixth-year center seems to have become more durable, and he has been able to increase his time on the floor by staying healthy and working - at least on some nights - to do a better of job of avoiding bad fouls than he had in the past.  His defensive game isn't all-world (he could do a better job of sliding and playing defense with his feet rather than his hands), but it continues to improve, and he plays a physical brand of basketball inside, occasionally complete with a blocked shot at an opportune time.  On the offensive end, Perk is showing signs of having finally begun to develop some touch around the basket.  These are all important steps in the right direction.

But in addition to the fact that the 24-year-old center still has a ways to go with each of the aforementioned facets of his game, there is one more area of improvement that may be the easiest to cure and may demand his attention most immediately: stopping - or at least significantly slowing down - his acquisition of technical fouls.

As many Celts fans are aware by now, Perk picked up his league-leading eighth tech of the season on Sunday afternoon against Toronto.  This came in the season's 15th game, which means that this team's starting center is averaging a technical foul more frequently than in every other contest.  Given that the league mandates a one-game suspension for anybody who picks up 16 technicals in a season and subsequent suspensions for every other technical after that, this isn't a particularly comforting trend for Perk's games played totals.  It is also a silly way to constantly give points to opponents.  Worst of all, it seems all but entirely preventable.

Maybe someone can explain the need for this to me, because I don't get it.  I just can't wrap my head around what the need is for Perk to be constantly jawing at opponents and referees, particularly now that he knows that it is going to get him T'd up.

I don't read lips, and I'm not sitting courtside every night, so I don't know what Perk is saying on the floor.  But I do know that he virtually always seems to be saying something to opponents or officials, usually accompanied by some demonstrative gesticulations or the newly patented Angry Perk Face.  The Angry Perk Face is cool (or at least it is amusing).  The technical fouls aren't.

The rationalizations that I've heard around don't seem to add a whole lot of credence to Perk's on-floor behavior.  He plays a physical game, sure, but there is plenty of contact on the interior in this league that goes by without incident.  It's the inability to walk away after the fact that gets guys in trouble, and Perk not walking away does the Celtics little good.  Getting the job done by bruising and banging on the floor sends a message to opponents that they need to be ready to play when they walk in against the Celtics.  Yapping afterwards only raises red flags for the officials.

The idea that he is an emotional player doesn't cut it as a viable excuse either. The league allows all manner of yelling and screaming on the court by its players.  Doing so demonstratively in the face of an opposing player or a referee is the equivalent of filing a request for a technical.  Playing hard is great, but it needs to be coupled with playing smart, and a big part of that is harnessing emotion into a form in which it helps a player rather than risks extra points against his team or his removal from the court.  It is Perk's responsibility tone down some of his act rather than the refs' job to give him some leeway as an 'emotional player.'

Finally, the issue of Kevin Garnett as a role model in this regard needs to go out the window.  The NBA has sent a clear message with its officiating over the past couple of decades: Not all players are created equal. Kevin Garnett is an eleven-time All-Star, a former MVP, a future Hall of Famer and one of the best to ever play his position.  For that, he gets a bit more leeway with the referees than do many other players across the league.  Just like LeBron James.  Just like Kobe Bryant.  Just like Tim Duncan.  Like so many other current stars across the league, and like Michael Jordan and many others before them.  And not like Kendrick Perkins, he of 4.9-points-and-5.1-boards-per-game-for-his-career fame.  Right or wrong, that's the way the system works, and those in this league know the way it is.

Since it isn't changing anytime soon, it is the responsibility of the players to adjust to that system.  The fact that the leaving-the-bench rule is viewed by many as silly doesn't change the outcome of the 2007 Suns-Spurs series.  Similarly, the fact of the existence of star treatment won't offer the Celtics reprieve if Perk costs the team dearly by getting T'd up in a big spot for something KG could have done with no trouble.  It doesn't make all of what KG does right, but it does mean that Perk needs to know that he can't expect to be held to the same standard as Garnett is.  Fifteen games into their second season as teammates in the frontcourt together, it should be evident to the Celtics' center that he is going to be penalized for the extracurricular yapping and related activities.

Which means it needs to stop.  By and large, the officials in this league aren't coming onto the floor for the sake of being out to get certain players.  I find it incredibly difficult to believe that Kendrick Perkins will be hit with too many technical fouls if he gets on the court, plays hard and walks away from his opponents and the referees at the conclusion of each play.

Former NFL player and current coach Herman Edwards once answered the question of star treatment by saying that he would treat each player fairly, but that this wouldn't necessarily constitute treating each player equally.  Perk isn't Garnett or Paul Pierce.  He isn't those players in the officials' eyes, which means he won't have as much leeway before getting his first technical foul or as much protection from getting the second one that would disqualify him from a game.  He also isn't the player those two are in terms of his value to this basketball team, and like it or not, the fact of the matter is that it's a lot easier for the Celtics to live with the occasional tech from Garnett or Pierce (players who more than make up for it) than from Perk.  That doesn't mean the two stars need to be running around picking up technicals either, but the truth remains that the standards are different.

From the looks of things from afar, this isn't an innocent victim.  That his mouth is always going has already been discussed in this piece, but we would remiss to chat about Perk's technical situation without touching on last Thursday's incident against the Pistons, which was simply unacceptable.  With two-tenths of a second left in the first half and the Celtics leading by eight, Paul Pierce drew a foul on his way to the basket, and Jason Maxiell blocked his shot as the whistle was being blown (as Garnett so often does to opponents).  As Maxiell landed, he made apparently inadvertent contact with Perk, who responded by shoving him off, immediately earning himself a technical.  There was no reason for it.  Just an after-the-whistle shove right in front of the officials.  That's an inexcusable way to hand a free point to the other team.

As his all-around game continues to improve, Kendrick Perkins becomes increasingly valuable to this Celtics team.  This makes it all the more important that he be able to stay on the floor and to do so without costing his team with uncalled for behavior.  The sooner he finds a way to harness his energy and limit his tough-guy act to the game that goes on between the whistles, the better off Perk and this team will be.