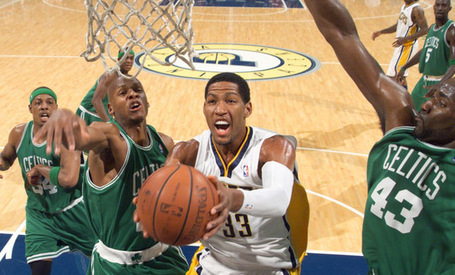 So far, we have a close win over the Eastern rival Cavs, a blowout win over a young Bulls team, and a bad looking loss against a Pacers team that nobody is sure what to make of yet.  Oh yeah, and we are the defending champs.  So does that title mean that we can give them a pass on an early season loss?  Or does that loss signal a step back that we should be concerned with?

The quick answer is that we just don’t know yet.  It is far too early to panic and it is also too early to declare that the team is just as good as it was last year.  The team is off the pace they set last year, but is that even a fair measure of this team?  Not many teams start out 12-0.  Championship teams sometimes get off to slow starts and pick up steam at the end of the year.  I’d rather this team finish well than start well.

With that said, all we can go on right now is this small sample size.  Tossing out the preseason, we have three games to review.  We had concerns coming into the season.  Would the team have a good backup to Perkins?  So far Powe has been solid and Big Baby hasn’t.  Would Tony Allen step up in the absence of James Posey?  So far, he’s been pretty good.

A trend that many people have noticed is how the team seems to struggle against younger, athletic teams.  The Pacers have some young guys that stepped up on Saturday which reminds a lot of people of the Hawks series last year.  On the other hand, the Bulls are young and fairly athletic and they were totally out of their league against the Celtics.

The Hawks series showed that a young team can steal some games from the Celts.  It also showed that over the course of 7 games, the better team still wins.  I have a lot of confidence that if we played the Pacers in a 7 game series, Doc and the coaching staff would adjust to Dick Harter’s blitzing-the-pick-and-roll defense and Thibodeau would find a way to frustrate the Pacers’ offense.  A good jump shooting team like the Pacers is bound to steal a game or two when they are knocking them down.  But I think it is safe to say the Celtics are still the better team.

So, we shouldn’t be overly concerned over a single loss this early in the season.  If anything, I’m a little relieved to see that the team won’t be pushing hard to keep a winning streak alive.  They might run the risk of running out of steam as the season drags on.  This becomes more and more of a concern the older the stars get.

On the other hand, the last thing we want to see is the team being content to coast through the regular season.  We’ve seen the Pistons throttle it back on a couple of occasions, thinking they could turn it on when the playoffs rolled around.  I think that hurt them by developing bad habits.  You play like you practice.  Few people are worried about the Celtics taking that attitude with Kevin Garnett and Paul Pierce on the roster, but I guess you never know.

I’d like to see Bill Walker make enough progress to be someone we can call upon to make a contribution.  Perhaps he could provide some athleticism to counter what some of the Atlanta Hawks of the world throw at us.  But he has to be ready.  If he’s lost or can’t pick up the defense quick enough, he does us more harm than good.  Hopefully he’ll be ready sometime this year.

The same goes for JR Giddens, though I have lower expectations for him based on the preseason.  I’d like to see a little more of Gabe Pruitt, especially now that he’s in his second season.  Maybe we could see some more of Pruitt at the 1 and House at the 2 with the second unit.  I want to believe in Patrick O’Bryant, but so far he’s been invisible.   With all these guys, we’ll just have to see if they can earn the minutes.

So, maybe help is on the way, maybe not.  Maybe this first loss is just a bump in the road that will be quickly forgotten about.  Maybe it is the harbinger of doom that signifies the beginning of the end, …though not likely.  All we know for sure is that these are the defending champs and we have 79 games left in the regular season.

Side Note: In the past I’ve self imposed a "15 game rule" where I decided not to judge the team before seeing at least 15 games.  In the past couple years I tossed that rule aside pretty quickly.  First the team was epically bad.  Then they were phenomenally good.  Maybe now that we’ve gotten back to “normal” I should reinstitute it.  We’ll see.