Green Eyed Thoughts On The Trade

Share All sharing options for: Green Eyed Thoughts On The Trade 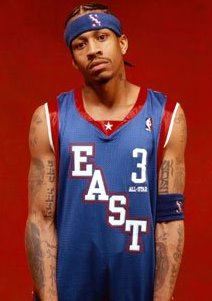 Allen Iverson is coming back to the Eastern Conference to play with the Pistons. I could care less what the Nuggets do. They aren't likely coming out of the West for a while. The Pistons are another matter. We knew Dumars wanted to reload, but who knew that they would make a move this early in the season?

I consider this mostly a move for the future, opening up a ton of cap room for either a run at LeBron (with Rip, Stuckey, Amir, and Maxiell already in place) or perhaps another blockbuster trade at the deadline (AI and Sheed have expiring deals). So in a couple of years, this team could be right back to title contention, which is why Dumars is one of the best in the business. (For more from the Detroit perspective, see Detroit Bad Boys)

However, you can't ignore the potential impact this deal could have on the present. I think Billups is a great player and perfect for that system he knows so well. So from that perspective, anyone short of LeBron would be an initial step back. However, even if he's getting older, Allen Iverson is still AI. He's still one of the hardest working guys on the floor and he still gets his shot off anytime he wants. Does he make the Pistons a better team? Can he play defense? We'll see, but I don't think he puts them over the top regardless.

So that's good news for us. If you put our window (with the current group) at 2 more years, then the Pistons have potentially taken a step back this year and might just take another year to regroup before landing a big fish.

Of course this also raises the question in some people's mind. Do the Celtics keep all of their "sacred cows" (as Dumars might say)? Ainge famously urged Red to trade McHale and Bird when they were the broken down Big 3. I don't think anyone would be surprised to see him do the same with at least Ray Allen. On the other hand, I get the feeling that Wyc and the owners would be very reluctant to trade any of the Big 3. So if nothing else, that becomes an interesting situation to monitor over the next couple of trade deadlines and offseasons.

Back to the immediate future, we get to see our first glimpse of the AI era on Sunday. If nothing else, it should be entertaining to watch Rondo chase him around on defense (and perhaps blow past him on offense).

So what do you think about the trade? Does it make the Pistons better right now? Do they have a good shot at landing LeBron? Who will win the game on Sunday?