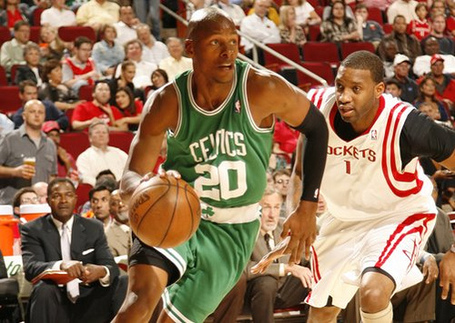 Back when the Celtics first traded for Ray Allen, he sat down and did a number of interviews with the local media. My first impression of him was that he was as smooth as a politician answering those questions. So it only makes sense that he would shine on Election Day.

Sometimes it feels like the Big Three take turns taking over a game. When one of them gets hot, especially from outside, the team just keeps feeding him the ball. Tonight was Ray Allen's turn. He dropped 29 points on the Rockets with layups, pull-up jumpers, and a couple of three pointers. So he gets the game ball.

However, I can't go any further without singing the praises of Kendrick Perkins who was playing before his hometown crowd. On offense, Perk surprised everyone by knocking down jumper after jumper from the elbows. Even better, he played suffocating defense on Yao (when he wasn't sitting on the bench in foul trouble). Perk ended up with 15 points, 7 rebounds, and a huge 4 blocks (and just 2 fouls). Just a huge night by the big fella. Yao was so flustered, that he short-rimmed a dunk attempt. Hilarious.

The rest of the starting five added their own flare to the box score. KG got a double double (though just 14 points). Pierce only scored 13 points but had a +/- of +16. Rondo pulled down 7 rebounds and dished out 7 assists.

Houston is for real as a legit contender and worthy opponent. McGrady proved once again he can fill it up when he gets hot. Luis Scola had a very solid 21 point, 9 rebound game. Artest was reasonably quiet but still chipped in 15 and 7 himself.

The other theme of the game was all the runs. The Celtics got up big early, then let the Rockets pull ahead on a 23-4 run where the C's looked confused and discouraged. Once they got organized, Boston went on an 11-1 run of their own to end the half. The 2nd half was just a back and forth battle that wasn't really over till the final free throws.

This was at times an ugly game where the defense didn't show up all game, but it stepped up in the fourth quarter when it mattered the most. So a win is a win, especially against such a quality opponent. The Champs are back on track.