Celtics Want To Roll With McDyess

Share All sharing options for: Celtics Want To Roll With McDyess 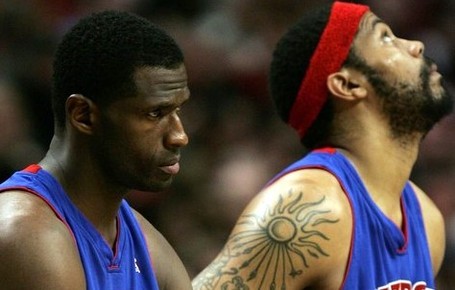 Forgive me for the title.  It even made me cringe, but I couldn't resist.

Mark Murphy from The Herald is reporting that the Celtics will be interested in Antonio McDyess if and when he gets bought out.

According to a league source, the Celtics would be especially interested in bringing in the veteran power forward. The C’s initially attempted to sign McDyess in 2004. He instead chose to sign with the Pistons, who at the time were opening defense of a world championship.

Most observers expect McDyess to return to Detroit after the league’s mandatory 30-day waiting period. But McDyess, reportedly upset by the trade, can expect to hear from the Celtics if a buyout does indeed go through.

Though Leon Powe and Glen Davis have performed admirably behind Kendrick Perkins, the Celtics eventually will need a player with more length to fill the role that P.J. Brown held on last season’s championship run. McDyess, a starting member of Detroit’s front line, would be the perfect replacement for the since-retired Brown.

Clearly he'd be a wonderful pickup for the Celtics.  His veteran presence would be a boost to the frontcourt and as Murphy suggests, he would give Doc an option with more length than Baby or Powe.

However, as the article states, most assume that Antonio will return to the Pistons.  In fact, it is rumored that on his way out he said he'd rather retire than play for anyone but the Pistons.  That attitude may have changed, especially once his agent whispered in his ear about not saying anything to mess with the buyout negotiations.

The Nuggets want to save on the luxury tax and buying out McDyess makes bottom line sense to them (even if it doesn't make a ton of basketball sense).  So chances are he'll be a free agent and once again his agent will shop him around the league for 30 days just like Brent Barry was last year.  So Boston has a legitimate shot to steal him away.

However, as Matt Watson of Detroit Bad Boys points out, you only have to look to the way last year ended to get a feel for what his attitude is.

in the aftermath of being ousted from the Conference Finals by the Celtics last year, I watched McDyess fight back tears while telling reporters that he’d rather retire than attempting any shortcuts to a title.

"I don’t want to be no ring-chaser, I don’t want to be moving team to team being a ring-chaser. I can’t do that. If I have to do that, I would definitely give it up. I mean, if I stay on this team another couple of years, we still have a chance, we just got to put our heart into it and do it."

That doesn't sound like a guy eager to take the PJ Brown route to a ring.

On the other hand, the team he was so fiercely loyal to just traded him away and is in the process of a major roster shakeup.  So you never know.