Half Hearted Wins Count Too

Share All sharing options for: Half Hearted Wins Count Too 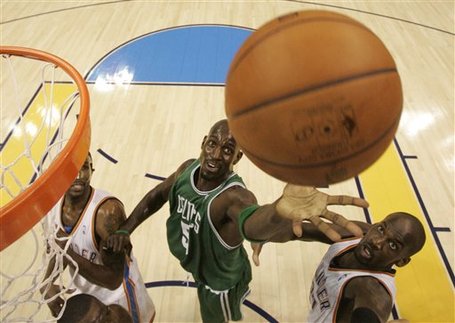 The opponent tonight was one of the worst teams in the league and the Celtics mostly played down to the competition.  It was a sloppy, half hearted effort, which turned out to be enough.

The Thunder (that still seems odd) came out strong and pumped up in the first quarter.  Once the Celtics wiped the sleep out of their eyes, they easily took over the 2nd quarter.

Headed into the third, they had every opportunity to put the game away, but chose instead to treat the night like a pickup game.  They were trying around the back passes in traffic, dribbling off their feet, and settling for long jumpshots.  The body language was poor and it was flat out boring to watch.

On the positive side, the Celtics defense stepped up a bit, holding OKC to 25 percent shooting in the 2nd and 3rd quarters (according to the recap).  Then again, maybe the Thunder are just that bad.

If the Celtics had taken the opponent a little more seriously and finished them off earlier in the second half, the would have gotten the rest of the 4th off to watch the bench play out garbage time.  Instead, it seems like Doc was almost punishing the players by making them play the rest of the 4th even when the lead was hovering around 15 points.

So while Doc has made it a stated goal to play the big three less, we saw Pierce play 39 minutes and Allen 38.  I was hoping to see a little from Bill Walker and Gabe Pruitt in scrub time, but I guess I'll have to wait for another day.

It was sloppy and boring but it still counts as a W in the record books, and that's all that matters today.