No Answer For Celtics' D

Share All sharing options for: No Answer For Celtics' D 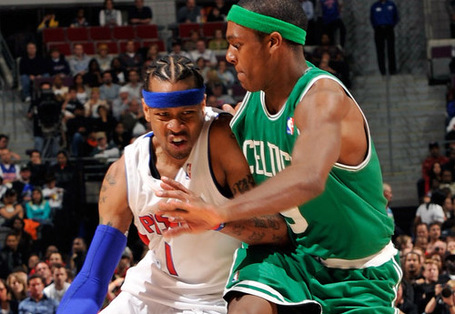 It was Allen Iverson's home debut in Detroit and the Celtics spoiled his party. In particular Tony Allen was all over the court on both sides of the ball. When he wasn't disrupting plays or stealing passes, he was driving to the hoop and making tough layups in traffic (good for 23 points). Great game for Tony.

The game started out ugly, with both teams shooting ice cold from the floor. Eventually the Celtics picked up the slack while the Pistons simply didn't. They are obviously still out of synch without Billups and Iverson appeared to be deferring a bit too much. Eleven field goal attempts is not the AI we all know (and love?). Of course it all worked out for us, so no complaints here.

Paul Pierce was also off his game and got into quick foul trouble that limited him to just 21 minutes. Thankfully his team didn't need him on this night, so it was a good rest opportunity for him. Ray Allen had a solid night, with 7 of his 17 points coming from the line. Rondo and Perk contributed as well, with Rondo falling to the floor for 3 more times (he must lead the team in that department - somebody get that boy some bubblewrap).

Still, the story of the game, aside from the suffocating defense, was Tony Allen's play. He's no James Posey, but he ain't half bad. And on nights like tonight, he shows us all why Danny Ainge had so much confidence in him this offseason. He was a joy to watch tonight.