The Scary Part of What the Cavs Are Doing

Share All sharing options for: The Scary Part of What the Cavs Are Doing 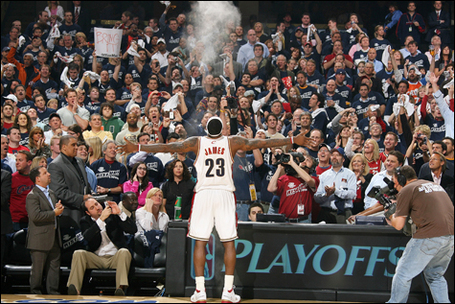 It was the Cleveland Cavaliers who gave our beloved Celtics their toughest test of all four playoff opponents last spring, pushing the Celts to a seventh game that remained undecided until the final seconds.  It is the Cavs who were believed by many (self included, it's not often that I make a prediction that doesn't go south immediately) to be the Celts' biggest challengers in the East this season.  At 18-3 with an average point differential of plus-13.6, they have no doubt met expectations thus far.  But it is the fact that the Cavaliers  currently lead the Association in offensive efficiency that is a cause for concern for fellow contenders around the league.

We knew this team could defend.  The Cavs ranked fourth in defensive efficiency in 2006-07  They fell to eleventh last year largely because they played the first quarter of the season without holdout Anderson Varejao, who may be their best interior defender.  With Varejao, Ben Wallace and Zydrunas Ilgauskas on the front line, this team has as much size as any in the East.  Despite Wallace being definitively on the downside of his career, he can still hit the boards and defend a bit.  What the Cavs have done and continue to do is clog the paint, take charges and avoid giving up second opportunities to opposing offenses (and that freakish small forward makes a couple of insane plays every night) .  It's no surprise that this team is second in basketball in defensive efficiency.

What has made the Cavs beatable in the past is that they couldn't seem to find the right mix of players with which to surround LeBron James and his special set of talents.  Keying on LeBron - as the Celtics did in last year's playoffs - made this squad stoppable by good team defense as the supporting cast couldn't seem to do enough to carry the load when tested.

Not the case right now.  For the first time, it seems that Danny Ferry has surrounded LeBron with a cast full of players who fit beautifully into their roles around the young star.

Mr. James, of course, needs no introduction.  His per-game stats are actually down to a not-quite-miserly 26.5 points, 7.0 boards and 6.5 assists per game, but that is a function of LeBron playing just 35 minutes per game.  This marks the first time since his rookie season that he has averaged less than 40 per night.  James' per-minute production is actually better than ever as he is averaging career highs in points, rebounds, assists, steals and blocks (and a career low in turnovers) per 36 minutes.  He is also playing the most efficient offensive basketball of his career, putting up a true shooting mark of 58 percent.  The fact that 15 of the team's 18 wins have come by double-digit margins will only leave Bron more well-rested for the playoffs.  Wonderful.

But at the risk of sounding as though I take LBJ's play for granted, we've seen LeBron perform at a high level before.  It is this supporting cast that has been the X-factor thus far.  That starts in the backcourt with new addition Mo Williams and newly repositioned Delonte West.  Williams came to town with a reputation as a shoot-first point guard who didn't do much defensively.  He hasn't been great defensively, but he hasn't killed the team by any means either, and his offensive contribution has been big.  The jump-shooting guard is scoring 15.4 points per game (second on the team) on 55.8 percent true shooting, and he's forcing defenses to pay attention to him.  He is still dishing out more than four assists per game.  Williams' aggressiveness to take and ability to make shots while also doubling as a floor general has added a new dimension to this offense.

Williams' arrival has been a boon for Delonte West.  Not a true point guard, West is now excelling at the off-guard spot armed with a primary responsibility of stretching the floor.  The defensive focus required on James and Williams provides West no shortage of good looks, and he has been capitalizing on them with more efficacy than ever before.  The former Celtic is using his sweet southpaw stroke to bomb from deep to a tune of 43.5 percent three-point shooting and 48.5 percent from the field overall.  West is scoring more than 11 points per game and doing it on a career best 61.6 percent true shooting.  He is fast becoming a weapon for the Cavs, and he looks as comfortable as he ever has at the NBA level.

That Daniel Gibson has yet to heat up makes the backcourt even more of a threat.  Gibson is a 40.9 percent three-point shooter for his career, but he is checking in at just 29.4 percent this season.  Hard to imagine that he will continue at that rate, and once he finds his stroke, he will be just one more stretch-the-floor guy to give James, Williams and Zydrunas Ilgauskas more room to operate.  Meanwhile, Wally Szczerbiak has helped out a bit in this role, shooting nearly 48 percent from the field and scoring a shade less than seven points in less than 20 minutes per game.

In the frontcourt, Ilgauskas remains the rock, causing matchup problems with his 7-foot-3-inch frame.  Z shoots the ball very effectively for a big man, and he is also comfortable camping out in the low post and backing down smaller opponents with his array of spin moves and jump hooks.  He gives this team more than 15 points per game and does a solid job in pick-and-roll sets.

One would be remiss to discuss the Cavs' offense without also touching on two contributors who don't carry quite as much of the scoring load: Ben Wallace and Anderson Varejao.  Neither needs to be shooting the ball all too much, but both specialize in doing the little things: crashing the offensive glass, fighting for 50-50 balls, screening and looking to finish garbage buckets around the rim.  Wallace grabs nearly three boards per game at the offensive end.  Though he isn't featured in the offense by any means, Varejao is shooting 60 percent from the field and averaging a career high 8.3 points per game simply by taking what the defense gives him as far as dunks, putbacks, tip-ins and the occasional drive to the rim are concerned. The Cavs as a team are fifth in basketball in offensive rebound rate, and the efforts of Wallace, Varejao and Ilgauskas are a big part of the reason why.

As is often the case, the Cavs are showing that when a group of players come together in a situation in which everyone knows and understands their roles and complements each other without trying to do too much, the team plays more effective basketball a whole.  They are taking care of the basketball, ranking fifth in the league in turnover ratio, and they are making the most of their shots, too.  The Cavs sit at fourth in points per shot and second in true shooting across the Association.

Mike Brown has his defense running smoothly as usual in Cleveland.  But it's that top-ranked offense that adds a new danger factor to this Cavs team.

Well, that and the fact that the Cavs are only expected to get better come February when they move a couple of expiring contracts for a veteran contributor.