Wondering About the Suns' Plan

Share All sharing options for: Wondering About the Suns' Plan 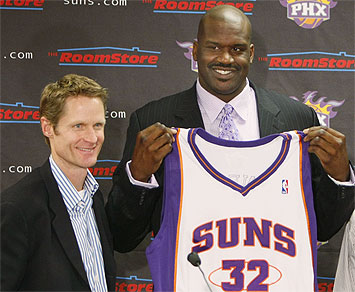 For the second time in ten months, Steve Kerr has shaken up his roster in Phoenix.  Last time, like it or not, Kerr sent a clear message about the philosophical direction the team was headed moving forward when he dealt Shawn Marion to bring an aging Shaquille O'Neal to town.  The message isn't quite as clear this time around.

On Wednesday afternoon, Kerr traded Raja Bell, Boris Diaw and Sean Singletary to the Charlotte Bobcats in exchange for Jason Richardson, Jared Dudley and a 2010 second-round draft choice.  Of the significantly paid players in the deal, Richardson will make $40 million between now and 2011.  Diaw is looking at $36 million through 2012, and Bell's contract expires in the summer of 2010, by which point he will have made another $10.25 million.

Credit the Suns for without doubt obtaining the best player in the deal.  Richardson is a big-time scoring threat, putting up right around his career average of 18.8 points per game this season.  Richardson shot better than 40 percent from the three-point line last season and hit 45.8 percent from deep in Charlotte this year.  In addition to being a perimeter threat, Richardson is a fearless slasher.  He has put up three seasons of at least 20 points per game, has a reputation as a good locker room guy and will be turning 28 years old in January.  This is all good.

Similarly, it seems that it was simply time for Bell to move on.  My colleague Phoenix Stan over at Bright Side at the Sun notes that Bell's frustration with adjusting to Terry Porter's system had become too counterproductive to this team's performance:

He was no longer a top or even decent defensive player and while his stand still shooting has been great he can't do ANYTHING else on the floor with the ball.  He's become an unhappy one-trick pony locker room cancer. Good [riddance].  Enjoy Charlotte and take all the shots you want.

And that's from a guy who doesn't like the trade overall.

Label me somewhere in the middle.  Thus far, it all sounds good:  The premise here involves getting another team's top offensive option in exchange for a malcontent and a player in Diaw who had been good but by no means great this season (and who has seen his production steadily decrease over his four seasons in town).

But it gets confusing from a philosophical standpoint.  The Suns came into their first full season with Shaquille O'Neal armed with a new coach in Terry Porter and a stated commitment to playing better defense, continuing to run but occasionally using more than seven seconds off the shot clock and being more willing to slow the game down and play offense in the halfcourt.

A month and a half into the season, meeting that commitment is very much a work in progress.  The Suns have dropped to 13th in the league in pace this season, but the formula of executing on one end of the floor and not the other seems to have remained in place.  Phoenix is sixth in offensive efficiency and 25th in defensive efficiency.  Richardson is a scorer who thrived in Don Nelson's wide-open, run-and-gun system in Golden State.  What Richardson isn't is a big-time defender.

Regardless of Bell's poor start, he is a guy who had demonstrated the ability to be an elite-level defender in this league in the past and could likely still have some of that left type of play left at age 32.  Further, the Suns had some scoring punch coming off the bench at the two in Leandro Barbosa.  In addition to the fact that it's hard to conceive Richardson as a defensive improvement over Bell, he is also likely to eat some of the Brazilian Blur's minutes.

Meanwhile, as Phoenix Stan points out, with possibly not enough minutes to go around in the backcourt, the Suns will be thin once more up front.  Diaw was playing more than 24 minutes per game behind Shaq and Amare Stoudemire.  His departure leaves the team with three small forwards (Grant Hill, Matt Barnes and Dudley) and no known commodity besides rookie Robin Lopez (currently playing all of 9.8 minutes per game) to consistently spell the bigs.

On one hand, it's hard not to fault Steve Kerr too much for making a move in which he got quite a good player without giving up anyone at that player's skill level.  Turning 28 soon, Richardson has the time left to be part of the Suns' operations for a while going forward, and he is a luxury to have as a non-primary scoring option.

But at the same time, the Suns had clear needs to address - defense and the frontcourt - and it appears that they only exacerbated those needs by making this move.  It wouldn't be a shock if another trade was on the horizon, but I'm not sure what chips the Suns would be looking to move or who would be the right fit.

While I'm busy being uncertain, this one is all yours, faithful readers:  Where are the Phoenix Suns headed from here?