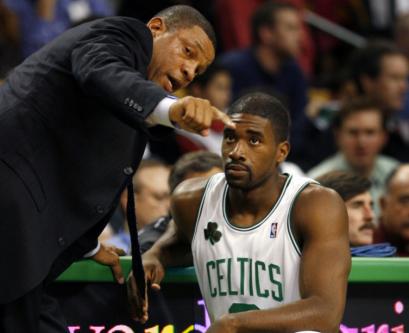 At 20 wins and 2 losses, finding nits to pick is like finding needles in a haystack.  And there's only so much you can say without sounding overly critical and irrational.  However, no team is perfect and not all wins are created equal.  Sure, every win counts the same in the box scores, but sometimes a W will obscure a deficiency (just like losses sometimes obscure good play).

So what is there to worry about on this team?  You could point to Rondo's jumper, but it is hard to criticize someone that is getting more and more All Star buzz.  You could pick on Kendrick's inconsistent offense, but suffice it to say that if he averages 5 points a game but defends the post up to his usual standard, nobody will be complaining one bit.  Oh yeah, and despite Paul's recent downturn in point production, nobody is really worried much about the Big Three.

So that leaves the bench.  Here's what Doc had to say about the bench after reviewing some film:

“Our bench has to improve,” Rivers said. “It’s got to be more consistent. They have a good quarter here and there. But we need to get them to be consistent game to game. They’ve been up and down.

“They’re young, it’s a young bench, and maybe that’s what we have to expect for a while. But we need them to be better.”

Rivers went with an all-reserve unit — with some great success — at the start of the winning streak three week ago, but he has gone back to keeping either Pierce or Allen out with the bench corps in most cases.

“I think our focus has to be more defensively,” Pierce said of those circumstances. “I think that’s where we’ve struggled. When the starting unit comes out, we really have to emphasize our defense and getting back.”

He's got the right idea (he's a bright guy after all, and knows a little bit about basketball).  The bread and butter of this team is defense.  When guys fall in love with their offense, they might expend less energy and focus on the other end of the court.

You can always expect some inconsistency from any bench.  After all, if the players were consistently great, they probably would be starting somewhere (there are notable exceptions of course).  On the other hand, to consider this a great team, we need the non-starters to have clearly defined roles and make sure they focus on those roles.

Tony Allen should not be trying to emulate what Pierce or Ray Allen do.  He should be driving to the hoop and pestering the opponents wing players.  Big Baby can work on his midrange shot, but not at the distraction of the rest of the offense.

Most of all, like Doc said, they should be focused on getting stops.  If the 2nd unit (with or without a starter plugged in) can hold the other team to just a few points over a 5 - 10 minute stand, it won't matter if they don't score much themselves.  They will have put the starters in position to do what they do to win ballgames.  If they can do that, we'll be much less concerned about the bench as we head down the stretch.

I'm still holding out hope that the team will find a big man to pick up.  They already have Sam Cassell on lay-away in case they need a veteran in the backcourt.  Scal isn't great, but he doesn't often make mistakes that cost you a game (and there's always the option to call up Bill Walker for some youthful energy).  I think Leon is set in the rotation, but we could use an upgrade over Big Baby at the center spot (and clearly the Notorious P.O.B. isn't earning any additional time).

Everyone would love to see PJ Brown show up for round 2, but there are any number of ways someone could shake loose from a current NBA roster.

I'll be closely watching what the Thunder do at the trade deadline.  Not because I anticipate them making any grand moves.  I just don't see how Joe Smith fits into their long term plans.  If he's not dealt by the deadline, they might just cut him loose to save a few bucks on his expiring contract.  Or sometimes a player (like McDyess) is traded to make salaries match and doesn't fit into the new team's plans and is bought out.

Bottom line, I think the plan is to find a veteran big by the end of the year to help this team down the stretch.  Until then, however, the bench needs to follow Doc's coaching and focus on defense and let the offense come naturally.