Ring Around The Posey

Share All sharing options for: Ring Around The Posey 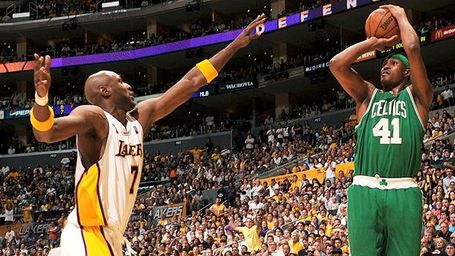 I know the topic of "will we miss James Posey?" has been beaten to death this year.  However, I just cannot let his return and ring presentation go without mention.  So once more, lets address this topic.  Personally, I find my answer depends on how you ask the question.

Do I miss James Posey personally?

Yes.  Yes I do.  All reports indicate he was a popular player in the locker room.  His extended man-hug pep-talks were inspirational even from afar.  He was a veteran who had Championship experience and could speak with authority on the subject of "what it takes to get a ring."

Everyone understands by now that he was one of those "intangibles" kinds of guys that did more than what showed up on the box score.  Part of what he did was to be That Guy that gets under the skin of opponents with a well placed elbow or hip check.  You know, the kind of guy you hate when he's on the other team.  (You have to wonder if he'll try something to get Perkins T'd up or if he would save something like that only for the playoffs.)

Posey was also one of the key ingredients to installing Tom Thibodeau's defense.  To get a defense to work, you need buy-in from the players.  KG was always going to be a defender.  Pierce and Allen bought into it because they saw the opportunity to win.  But it was Posey that brought that Championship swagger and took on a leadership defensive role with the bench.

And who could forget his timely 3 pointers?  It wasn't just the points.  It was the dramatic effect of his timing.  Just when the opponent was making a run, bang, run over.   Just when the C's offense was starting to sputter, bang, rebooted.  Gave me giggle fits whenever he delivered the dagger.

Yes, there's a lot that I miss personally from watching him play.

Does the current team miss him?

From a bottom line perspective, no.  Not at all.  They officially have bettered their record from a year ago.  They have not taken any steps back in terms of defense, which had to be the primary concern.  The offense has been up and down, but Posey seldom brought more than those timely 3's to the table.

Tony Allen has stepped up his game tremendously.  He adds a dimension of driving to the hoop that the team didn't have much of last year.  Leon Powe has become a steady rotation player, and a more traditional power forward than Posey was when filling in there.  Nobody is going to say that Scal makes a big difference, but he's been solid for the most part when called upon.  And finally, as I mentioned before, Ray Allen's resurgence has given the team plenty of timely 3 point shooting.

Even without Posey, there is a lot of consistency on the roster from their title year.  They all know what to expect from each other and they could very well end up being a better team than they were last year.

Will the team miss him come playoff time?

There's the rub.  We just won't know till we get there.

Do I trust Tony Allen to give a consistent, error-free performance in a close playoff series?  If Paul gets into foul trouble, are we really going to look to Scalabrine?  Or will we go to a small-ball lineup and hope for the best?

What other "little things" did Posey do last year that we might miss out on this year?

Who will play the role of bad guy to the other team?  Posey wasn't just a guy that instigated.  When things got chippy, he took the brunt of the abuse and laughed it off with a sly grin.  Can we assume that Perkins will be able to do the same?  How about KG?  What happens if things get a little nutty and KG does something to get suspended?  These are the things that you just don't know.

Of course, you can only take that so far.  Who knows what tomorrow might bring?  Injuries, odd matchups, and plain bad luck are other things you can't plan for.  You just have to overcome like Champions.

So, do we miss James Posey?  Yes and no, ...and maybe.  It will be great seeing him tonight and I'll be forever thankful for his contributions to the team last year (many of which set precidents that have carried over into this year).  He's a Champion and he'll always be remembered fondly.