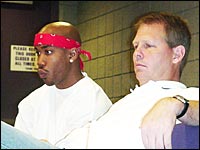 I hate to do this, because of what I did to you folks earlier today, but this time I'm just passing along a rumor.

The Boston Celtics are one of a handful of teams, according to sources close to the situation, who have expressed interest in embattled Stephon Marbury if the embattled point guard is bought out by the New York Knicks.

Marbury, who was told by the Knicks earlier this month to stay away from the team until a resolution is arranged, has also fielded interest from Miami, Dallas and the Los Angeles Lakers, according to league sources.

Celtics boss Danny Ainge, according to the source, is legitimately interested in bringing Marbury on board because of his ability to handle pressure defenses – an area where backup Eddie House has struggled.

Ainge believes the locker room is strong enough – with veterans Kevin Garnett, Paul Pierce and Ray Allen – to handle the addition of the enigmatic Marbury.