How the Other Side Thinks: Hoopinion

Share All sharing options for: How the Other Side Thinks: Hoopinion 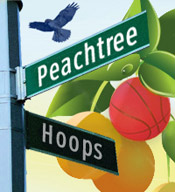 Four blowout playoff wins at home.  Three hard-fought but poorly played losses on the road.  A buzzer-beating thriller at home two weeks into the new season.  Suffice it to say, the Celtics' recent history with the Hawks has been an eventful one.  With the Celts heading down to make their first trip of the 2008-09 campaign to the house of horrors that is Philips Arena, we check in today with my favorite Hawks blogger: Bret aka Hoopinion of Peachtree Hoops.  No home-and-home as Bret makes the wise decision to preserve his bandwidth by not having me ramble endlessly in his web space (sorry, Blazer's Edge folk!), but he's got plenty of good stuff for us, including a surprisingly honest commentary about SW favorite Joe Johnson.  Away we go...

SW:  Predicted by some (read: yours truly) to fall out of the East's playoff picture this year, the Hawks roared out to a 6-0 start before losing a barn-burner to the Celts and then skidding for a bit.  The Hawks have now won three straight to get back to six games over .500 at 15-9.  Give us a feel for how the Hawks' start has been received by the Atlanta faithful.  Is this what you expected?  What are the standards for this season, and how have they been affected by the Hawks' play over the first quarter of the season?

Hoopinion:  I predicted 34 wins before the season started, so count me among the surprised.  I think the fan reaction is close to the inverse of that which making the playoffs created last season.  Last season, the casual fan was pleasantly surprised that the Hawks made the playoffs whereas the serious fan was disappointed the team only won 37 games and had such difficulty making the playoffs.  This season, I get the sense that the general public is aware of the strong start but those who pay closer attention, of course, have a greater appreciation for how much better this year's team is even if the team hasn't eliminated all its weaknesses.

At this point, making the playoffs seems highly likely, so the goal for the team and the hope for the team's fans must be securing home court advantage in the first round.

SW:  More than anything else about your beloved team, I walked away from the Celtics' series with Atlanta last spring amazed by Joe Johnson.  JJ spent that series both terrifying me and establishing himself as one of my favorite players in the league as I kicked myself for largely forgetting about him during his tenure with the Hawks - smart player, good passer, good defender, freakishly dynamic scorer.  What is the best part of getting to watch this guy on a night-to-night basis?  Where does he rank amongst the dominant swingmen in this league?

Hoopinion:  I'm less of a Joe Johnson fan than most Hawks fans as I thought (and still think) that the team paid too high a price to acquire him.  That certainly doesn't mean that I think he's a mediocre player, just that it's not possible to build a championship contender if your best player is Joe Johnson.  That is not my most popular opinion.

That being said, Joe Johnson is plenty good enough to win individual games in spectacular fashion.  I'll never forget attending Game 4 of the first round series this spring.  When he can't miss, he's a joy too watch.  The rest of the time, I wish circumstances didn't make getting a clean look so difficult for him.

SW:  The Hawks made a major acquisition last winter when they picked up Mike Bibby from the Kings.  He was up and down over the last half of the season, and there was plenty of talk about whether he had lost a step or was battling injuries or both.  Thus far into his first full season with the team, what are your feelings on the value the veteran point guard brings to the table for the Hawks?

Hoopinion:  Mike Bibby has been a tremendous asset to the offense, and he hasn't been as much of a liability defensively as he was last season.  I've no doubt his strong, sort-of two-way performance this season is due to both better health and the motivation of it being a contract year.

Considering the next best option for the Hawks at the point is either the young guy the coach refuses to use as a backup point guard or non-point guard of long standing Flip Murray, Mike Bibby's value to this team is immense.

SW:  Which under-the-radar Hawk is primed for a breakout this season?

Hoopinion:  There really aren't any under-the-radar Hawks.  The end of the bench has only a tenuous case for being in the league, and the middle of the bench is made up of either career role players or young guys who don't have the coach's confidence.

Philips or the Omni?: Omni

SW:  The Hawks gave the Celts more of a scare than just about anyone outside (inside, too?) of Atlanta could have imagined, and they hung right there to the end even without Josh Smith in that thriller at the Garden in mid-November.  Despite the fact that it's only December 17, how much does this litmus test game mean to the Hawks?  What about to you as a fan?

Hoopinion:  I've been impressed with the Hawks beating the teams they should beat (seriously, that's a significant improvement over last season) and playing better teams tough with the exception of their loss at Cleveland.  And they got that one back (albeit against a short-handed Cavs team) on Saturday night.

A Hawks win on December 17th won't mean a lot in the grand scheme of things, but it'd be an awful lot of fun in the short term.

SW:  Got a score prediction for tonight's game?

Much thanks to Bret for coming aboard.  While we're hoping he isn't the world's greatest prognosticator, the rest of his insight is much appreciated.  And now I'm off to pick my colleague's brain about his use of "self-delusion" regarding his team's second best player.  As always, go green!