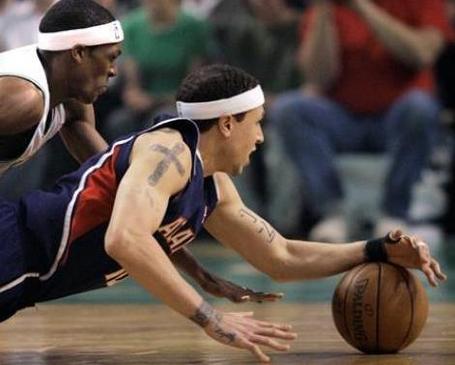 The Celtics visit the Hawks tonight.  If you remember, they couldn't win a single game in Atlanta in the playoffs last year.  Also, the Hawks just broke the Cavs winning streak.  There are a number of reasons why the Celtics cannot afford to take this game lightly.  From the Herald:

So maybe the Lakers are guilty of peaking ahead at the schedule, but the Celtics will not be.

Pierce is expected to play provided he has a solid shootaround.  No MRI or X-ray was needed.  Eddie House is also expected to be back with the club in time for the game.

The folks that run the Atlanta Hawks website reached out to me for some questions.  You can read the Q&A here.

Other things I learned while looking around their website:

Apparently the Celtics have noticed (from the Globe)

"Hawks.com currently offers a chance to watch highlights from last season's Celtics-Hawks playoff series. The video describes tonight's game in Atlanta as a 'renewed rivalry.' If you didn't know better, you would have thought the Hawks won the first-round matchup.

"We were talking about [the website]," Ray Allen said. "I'm sure it's been up there for a couple of days. We are really looking forward to it. Atlanta is ready and waiting and they've been promoting this for a while. The building is going to be a playoff atmosphere so we need to go down there with a different mind-set."

Oh yeah, and surely you haven't forgotten about Mike Bibby have you?  He's his usual charming self.

Make sure you continue to boo him whenever he touches the ball, no matter where you are.  Bonus points for doing it in public and even more bonus points if the people around you can't see the screen and have no idea what you are doing.