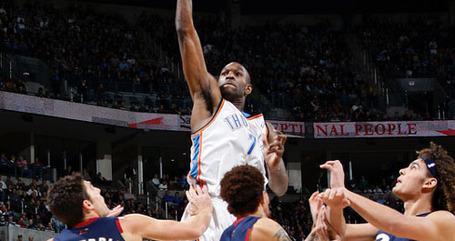 There are rumblings the Thunder will trade veteran forward Joe Smith after adding Krstic. The Raptors, Heat and Magic are three teams believed to be interested in Smith.

So if the Celtics are interested, there are three competitors for his services.  I only say "if" because Ainge seldom tips his hand.  He was quoted saying nothing by saying:

"There is a lot of [trade] discussion throughout the league, which can mean something or nothing."

Thanks Danny, that clears everything up.

Lets look at this a little closer though.  One team not mentioned is the Cavs.  They would love to get Joe Smith back for another run this year, but they cannot trade for him since he was traded by them less than a year ago.  If he gets bought out, the Cavs become a logical favorite.

"I would have interest in the Cavs, I'm not sure they would be interested in me," Smith said. "They would be an option."

However, I wouldn't bet on the Thunder holding onto Smith with so many interested trade partners.

We all know the Celtics have the same basic package to offer anyone.  Scal's contract and [fill in the blank] which buys us someone in the $4M range.  Scal won't be an expiring contract till next year, so he won't buy you anything all by himself.  They don't have many draft picks to offer, so the blank is usually filled by a young player like Big Baby or Gabe Pruitt.

Conveniently, Joe Smith for Scal and any of our young players works in the trade checker.  It looks like they could use a shooting guard, so I threw in JR Giddens for the sake of the checker, but who really knows what they are building in OKC?

Why would the Thunder take a guy like Scalabrine?  Well, one so they can match salaries to pick up a young player in exchange for a player they would have bought out anyway.  And two, because they can hold onto Scal to use as a trade chip at next year's deadline.  They have nothing but time on their hands and plenty of money under the cap to play with.

You can do your own research, but the other teams might have more valuable trade chips, depending on what OKC wants.  Toronto can offer up Anthony Parker (who has been rumored to be on the block anyway).

Miami doesn't have much unless you like 5 years of James Jones or 3 with Marcus Banks.  Orlando has a few players they can use to match salaries (Bogans/Redick anyone?) but would presumably need to add a pick to make it happen.  Plus I'm sure there are as-of-yet unnamed teams that would love to get their hands on Smith for the stretch run.

So what do you think?  Who has the best shot at Joe Smith?  What would you offer for him?