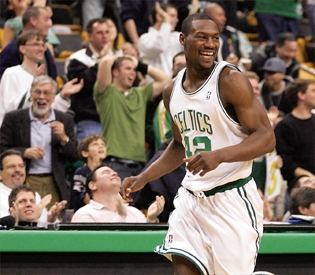 We're just a shade more than two months into Tony Allen's tenure in his new role as the Celtics' primary wing off the bench.  Thanks to some recent forum threads, an insightful fanpost from our own nickagneta, some internal reflection on my opening night piece about him and a few particularly pointed comments made by The Guru as of late, TA is on my mind today.  Time to roll out some early-season evaluations with 50 regular season games remaining.

The more I watch Tony Allen play in 2008-09, the more convinced I become of the validity of the assessment The Guru made some weeks ago:  Tony is a stronger player from a physical standpoint than he was a season ago, but his continued struggles with the mental aspects of the game still limit his progress.

When I praised Tony's play back on opening night, I focused the piece on what can be best described as the "No-no-yes!" plays of that evening.  These were the plays where Allen looked completely out of control and seemed to be headed for a bad shot or a charge but somehow managed to force the ball into the basket or perhaps even draw a foul.  In the opener against Cleveland, an abnormally high percentage of those plays that started "No-no..." ended happily.  In general, it's been fair to expect those plays to work with more regularity than they did a season ago, simply because he is healthier than he was last year.  His explosiveness may never return to the level it was once at, but his knee is clearly less of a restriction than it was in 2007-08.

Allen is really the only slasher off the Celtics' bench right now, and he is producing at a higher level than he did last year.  His field-goal percentage has jumped back to 47.4 percent from a career low 43.6 a season ago.  He is averaging 8.1 points per game and 14.6 points per 36 minutes, both the second best figures of his career.  TA is attacking the basket hard and getting better lift than he was a season ago, thus allowing him to finish more around the rim.  His increased comfort jumping and moving laterally has aided him similarly at the defensive end, where he has been helpful in stretches for the Celtics this season.

Allen is clearly a better player than he was a season ago, primarily because of his increased health.  That's good.  But a season ago, he ranked somewhere between eighth and twelfth man on this team.  He is now the first or second man off the bench, which means that the standards are higher and that it might not be enough for him to simply be better than he was a season ago.  And that's where the mental part of the game kicks in as a limitation.

TA's physical talents allow him to do some very good stuff on a basketball court.  He has the quickness and leaping ability to get to the basket and to earn trips to the foul line.  Those same attributes as well as his boundless energy can help him toward becoming a lockdown defensive player.  Playing hard is a good start.  But playing hard needs to be coupled with playing smart in order for that hustle to be as meaningful as possible.

Tony still isn't doing that.  When he goes to the basket, he still settles for simply putting his head down and bulling toward the rim.  That's an A-plus for aggressiveness.  It really isn't so good as far as other issues such as "seeing the floor," "avoiding offensive fouls," "being ready to make a pass rather than forcing a shot into a double team" and "not turning the ball over" are concerned.  He still doesn't seem to keep his head up when he pushes the ball, and it has resulted in his turnover figures being nearly as bad as ever.  His three turnovers per 36 minutes are more than any Celtic regular besides Kendrick Perkins (3.1).  His turnover percentage indicates that he gives the ball away on approximately 18 plays out of every hundred, worse than only Perkins and Rajon Rondo among Celtics who see the floor with any regularity.

The most frustrating part is that these are avoidable turnovers.  Too often, they come as a result of TA over-dribbling or running his way right into a defender because he isn't looking up the floor.  As Nick noted recently, he still doesn't space the floor well enough on the fast break, and he still seems far too willing to take the bait and careen directly into defenders who have gotten into the habit of planting in the lane and waiting for him.

As far as the shooting is concerned, Tony deserves credit for the fact that he is going to the rim more than he was last season, taking 62 percent of his shots from inside as opposed to 50 percent a season ago.  This is likely a function of confidence in his health allowing him to once again go to the rack without fear.  The problem here is that not only has his suspect jump shot not improved, it appears to have regressed.  After posting an effective field goal percentage of 41.6 on jumpers a year ago, TA is down to an abominable 26.7 percent eFG on jumpers this season.  He is also shooting a career low 71.8 percent from the foul line, which makes his ability to get to the stripe that much less valuable.  For all the chatter about the need for Rajon Rondo to put in the work on his shooting mechanics (and there is plenty of need), this is year five for TA, and his jumper has yet to even approach the neighborhood of semi-adequacy.

Defense remains the strongest part of Allen's game.  He is holding opposing two-guards to an impressive 46.9 percent effective field goal shooting, and his gambler's instincts make him an ever-present threat to make a steal that starts a fast break and leads to an easy bucket.  He is moving more fluidly, and (purely from an anecdotal stand point) he seems to be more consistently putting together several good defensive possessions in a row.  But he can still only go short bursts before losing his man away from the ball on consecutive occasions or getting beat on an up-fake or committing a silly foul due to his over-aggressiveness.  I can't say it enough: The physical play is great.  The defensive desire is great, especially in a league full of guys who can't be bothered.  But the overall defensive play could be so much better if he had the ability to focus on the nuances.  That's the difference between being a good and a great defender, and Tony has yet to give us the indication that he can make that jump.

I realize that TA is a contentious subject around Celtics fans and that I've likely opened the floodgates to being labeled a card-carrying member of the so-called "TA hater" crowd.  I'd like to believe that isn't the case.  I see a player with a ton of physical ability, a player who is no doubt to some degree better than he was a season ago.  Most importantly, I see a guy who wears a jersey that says "Celtics" on the front, and I'll root for all the best for him for as long as he does (which is why I've spent countless hours talking myself into trying to be a bigger believer of his over the years).

Sure, given the choice between a guy making ill-advised plays that end poorly and the same guy making similarly ill-advised plays that end less poorly because he is more physically capable of executing those plays at a higher success rate, I'll take the latter.  But until that player can take the next step toward playing consistently smarter basketball and making better decisions on the court, it will remain difficult to trust that player when a game - or perhaps a playoff series and thus a season - is on the line.  I'm far from at that point of trust yet with Tony Allen.  And as his role on this team becomes more vital, that's increasingly what this is all about.