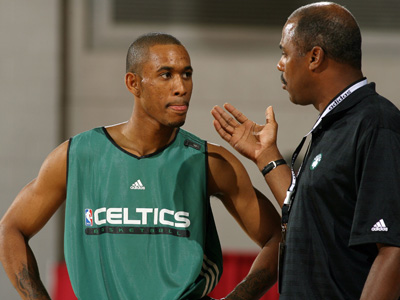 I can't bring myself to outright criticize the decisions of this coaching staff after a Championship and a 28-4 start to the season.  In fact, Doc and company have at least a two year free pass with me.  I mean, it would take a reverse-Spreewell move (Doc choking a player) for me to turn on him at this point.  With that said, I can't help but wonder how much longer it is going to take to give Gabe Pruitt a legitimate run at some more minutes.

For one thing, the guy has paid his dues.  He spent a good portion of last year working the D-League over, learning the pro game and getting a better feel for playing the point at this level.  Then he had an excellent training camp and preseason.  In the limited time he's had this year (mostly in garbage time, so numbers are largely irrelevant) he's looked solid and composed.  He's not spectacular by any means, but he's at least worth looking at more.

You could say that he needs to earn his minutes in practice, but given the C's schedule thus far, there haven't been a lot of practices to earn those minutes in.

There is also some sense of urgency to see what we have.

Starting January 5th, teams can sign players to 10 day contracts and you might see some guys start to get bought out.  One of those guys might be Stephon Marbury.  You can argue all you like about the merits of bringing him in or avoiding at all costs, but there are rumblings that he is at least interested in the Celtics and you can bet that Danny will at least ponder the concept.

Even if you dismiss the concept of Starbury in green, there are other options that might become available.  The trade deadline is coming in February and the team might face some decisions.  How much value does Gabe offer in a trade?  How much do we need a long term solution at backup PG?

The Celtics are primarily looking for big men, but if a point guard becomes available, is it worth spending the time and energy, not to mention the roster spot to pick someone up?  And don't forget that Player-Coach Sam Cassell is still waiting in the wings if need be.

We want to secure home court advantage, but I don't think we need to shoot for 70 wins.  I'm not saying play Gabe at the expense of wins.  But it would be nice to take a chance on him perhaps at the risk of losing a lead here or there.  It isn't as though the second unit has cemented their roles anyway.

Gabe would seem to fill a number of roles and provides many of the skill-sets that we value on that second unit anyway.  He's not quite the marksman that House is, but he can shoot the ball well from the outside.  He's not the slasher that Tony is, but he can defend both guard positions (especially 2nd unit guys).  He's not the creator that Rondo is, but he can bring the ball up and get us into our offense.

He doesn't have to take House's job or Tony's job.  He can spell both of them and maybe give Rondo and Ray a little extra rest.  At least it would be nice to see if he's up to the challenge.  He's been getting a little bit of non-garbage-time here and there, but I'd like to see Doc let him run a little longer while the game is still in doubt.

Tonight seems like a good opportunity with Portland (potentially) missing Brandon Roy and the Celtics rotation guys a little weary from a West Coast road trip.

Like I said, whatever Doc has been doing with the rotations has worked to the tune of a 28-4 record.  So it ain't broke and it probably don't need fixin'.  However, if we want the rotations to be healthy headed into the playoffs and see what kind of depth we have at the guard position, it would be wise to let Gabe play.