OK, Now You Can Panic (a little)

Share All sharing options for: OK, Now You Can Panic (a little) 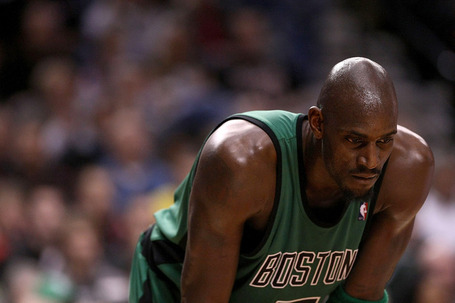 The Celtics are still one of the few legitimate contenders for the Championship and I still think we will end up winning it all this year.  However, that doesn't mean that we can gloss over a 1-3 road trip and pretend that nothing is wrong.

Sure, we have the banner from last year, but honestly that doesn't buy us anything but a little bit of swagger this year.  And I'm not sure that swagger has been all good.  Maybe the team had started believeing in the hype after a 27-2 start.  They are human after all, and it is very possible that they have been suffering from a bit of overconfidence.

There is a lot of buzz around the league about how much trash the team talks and the general outside opinion of the Celtics is that they are arrogant and disrespectful.  You can write that off as petty jealousy, but you have to understand that when reporters ask you time and time again if something is a distraction, eventually it becomes a distraction.

There are tangible issues as well.  For one thing the bench is officially a very big concern at this point.  They contributed a whopping 9 points last night.  Nine.  We need help.  We can't rely on the starters to do everything.

When asked about what the team needs to work on, Doc didn't pull any punches:

“Oh, the list is too long,” he said. “Timing mostly, defensively and offensively. You know, the more you practice the better your timing gets.”

It is also troubling to see the way the team has failed down the stretch of games lately.

Said Ray Allen, "Down the stretch we just made bad plays. It was reminiscent of the other losses."

Now, none of these flaws are fatal.  None of these issues are beyond repair.  The team has any number of excuses they can point to for the losses (fatigue, holidays, streak pressure, maybe even the refs - though I hate using that crutch).  The team can get back to practice and a little bit of home cooking and all should return to normal.

The next three games are against the Wizards, Knicks, and Bobcats.  So there will be ample time to get the kinks worked out before we face the Rockets and Cavs (who also lost last night).

Like I said, this team is still great.  They have hit a rough patch and in the long term it may even help them focus and get back to basics.  So when I say "it is ok to panic" I'm doing so with tounge firmly planted in cheek.  I'm not trying to be "that Boston fan" that overreacts to a little bit of adversity.  Still, there are real concerns here and the team needs to address them soon.

Bonus link: The Duke has some ideas on how to cure what ails this team.