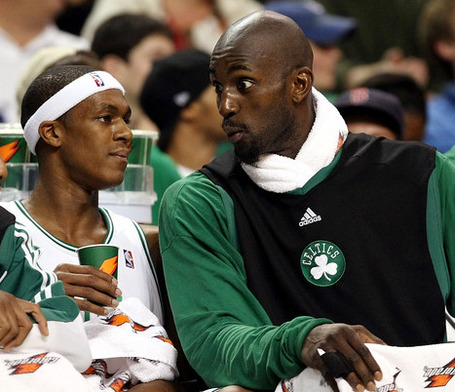 Rondo is at the top of the key, head on a swivel, surveying the options and watching the cutters and screeners execute the play.  Garnett is doing the big man dance; first looking for position on the block, then hedging out towards his favorite jumpshot spot, then just as his defender has been lulled to sleep, BOOM, he spins and cuts baseline.  Lob, catch, dunk.  You just got Rondo'd with a side of Ticket.

There is nothing not to like about the alley-oop.  It is a pretty play.  It is a high percentage play when done right.  It is a play that promotes teamwork.

I'll even take it one step further.  It is a play that happens only when two players (or perhaps a point guard and several players) are so in tune that they don't even need a play called or words exchanged.  They just both see the play developing and react as one.  Like a quarterback and reciever, they couldn't tell you how they know when to make the play, they just know.

Perhaps I'm overreacting a bit to the 3 alley oops from last night's game, but I have seen the play happen more and more recently and I'm excited about it.  Not just for the aesthetic value, but for the weapon it can be in this offense.

Garnett is getting older but he hasn't stopped putting forth all his energy on defense.  Still, something has to give, and at times that means he becomes more of a jump shooter than a low post banger.  We could discuss that more at length in another article, but for now lets just take it as a given that he likes that jumper (which to be fair is very effective).

The alley-oop just seems like an ideal way to get KG more high percentage shots in the paint without forcing him to bang with the big boys too often.  He's long enough and athletic enough that he can get to any lobbed ball Randy Moss style.  When he has an accurate passer like Rondo picking the right spots, it becomes even more effective.

Look at what Nash has been able to do with Stoudamire and others.  Look at how Chris Paul has elevated Tyson Chandler's game with the alley-oop.  It is a weapon and if used properly it can help space out the floor as effectively as a good back to the basket post game.  It isn't something you would run every play like the Jazz run the pick and roll but it is just one more thing for the defense to worry about.

I really look forward to seeing more of it as the year progresses.  It is a clear testament to how comfortable Rondo is becoming as a floor general.  It is an immediate reward for two teammates working together (assist and points).  And it is flat out fun to watch.