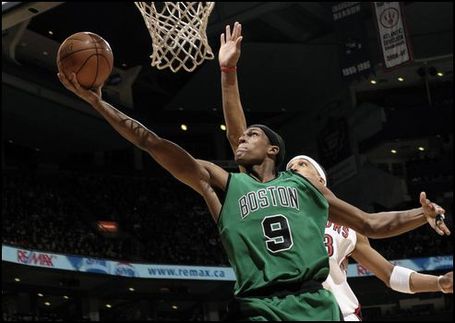 He shot an unspectacular 5-for-12 and had no less than three of his shots blocked.  He dished out two less assists and wound up with two more turnovers than he did Friday night.  The opponents were the soft-on-the-inside Toronto Raptors rather than the block-happy Cleveland Cavaliers.  But no matter what his box score line says, the confident Rajon Rondo we saw today was a world better than the one we witnessed looking scared around the basket two nights ago in Cleveland.

The Rondo we saw Friday night didn't want the ball in his hands anywhere near the paint.  He was indecisive with the basketball once he left his feet and appeared flatly fearful of shooting around the likes of Ben Wallace, Anderson Varejao and LeBron James.  When he caught the ball near the block, he didn't bother squaring up to the rim and looked to get rid of it as quickly as possible.

None of that was evident today.

Rondo came out with a purpose this afternoon in Toronto.  He attacked the rim hard and appeared insistent on not being overly reliant on floaters and tear drops.  The forays to the rim were aggressive moves on which he looked to explode to the finish.  He set a good tone for himself with two strong takes in the first quarter, drawing fouls on both and hitting all four free throws.

From there, the confidence only grew.  Rondo made a couple of driving lay-ups and earned himself a chance at a three-point play when he forced the ball in off the glass from the right block while being hit by Chris Bosh.  The exclamation point came when Rondo dished the ball to the left block from up top, sprinted down toward the baseline to receive the ball back and elevated to slam the ball home over Will Solomon with Bosh looking on.  The give-and-go facial was easily the play of the day.

Even the shots Rondo had blocked weren't agitating to watch because there was none of the uncertainty or midair indecision that often short-circuited the offense on Friday.  On all three attempts, he showed no hesitation in taking the ball up strong, even looking to stuff again on one of those plays.  It goes without saying that one would rather Rondo put the ball in the basket rather than have it blocked, and in the long run, he might be better not taking one or two of those shots in similar situations down the road (one was just a great recovery block from behind).  But for now, what this team needs is for its point guard to be confident and not to be avoiding going straight up to the rim in fear of the ball being swatted away.  That fear was nowhere to be found this afternoon, and it was reassuring to see Rondo keep going up after having a shot or two knocked away.  Though his production slowed in the fourth quarter, Rondo was in control offensively for much of the day, and he put together a complete effort with 14 points, 11 assists and six rebounds to go against his four turnovers.

Yes, the competition wasn't anywhere near as stiff as Friday's was.  Yes, Rondo's jump-shooting is still a significant issue, albeit one that is likely to be difficult to fix during the season.  But in lieu of that, no matter who the opposing bigs are, Rajon Rondo needs to play confident and decisive basketball in order to help this offense be the best it can be.  We gave him the blame he earned for not doing that on Friday, and it seems only fair to note that his mentality was nowhere near what it appeared to be two days earlier.  Kudos to Raj for taking a clear step in the right direction on a Sunday afternoon north of the border.