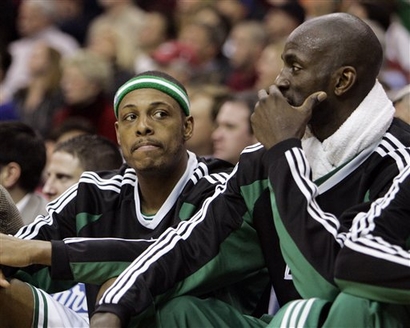 There are two key dates coming up on the calendar for all NBA teams, but especially for the Celtics.  February 15 is the All Star break (the Celtics will have 6 days off starting on the 13th).  February 19 is the trade deadline (at 3:00 PM).

All Star Break Better Than All Star Game

A month ago I had dreams of watching 4 Celtics participate in the festivities in Phoenix.  Now I'd like nothing more than to see none of them there.  The team is just too tired and worn down from a short offseason and a long season of playing with a target on their backs.

Rondo effectively played himself out of a spot in the last few weeks (though I still think of him as one of the top PGs in the East and think he'll end up the season that way).  I wouldn't mind seeing 2 or 3 of the Big Three pick one of their nagging bumps and bruises as an excuse to take a pass on the game.  I know the game itself is a bit of a joke with the lack of defense.

I know the guys don't typically end up playing that much anyway.  But the extra travel and game preparation have to add to the wear and tear and I'd rather see them home resting.  As it is, the rest of the team will be getting some much needed recharging during that stretch.

As for the trade deadline, it isn't that I think the Celtics have any major trades to pull off.  They don't.  However, a minor tweak might be all they need.  If we can move Big Baby for a big or a shooter, that helps.  And yes, I think Big Baby getting 30 mintues of game time yesterday was a bit of a showcase.  Baby might match up better with some players and he gives us some good energy off the bench, but on any given night Powe is the better player and fits into our team better.

Of course a trade is not very likely for reasons often stated here.  What is more likely is that the Celtics will be looking to add someone who is bought out from their contract.  A lot of non-guaranteed contracts were bought out last week, but there's a good reason for that.  Most of those guys aren't very good.  Guys that can still play at a high level are kept on rosters because teams know they still might get some trade value for them.

Joe Smith is not going to be released before the trade deadline.  He has too much value.  Marbury isn't going to be bought out until Walsh explores a few blockbuster deals (McGrady? Marion?).  I'm sure there will be more names shopped before they are dumped on the open market.

However, if they can't be dealt by Feb. 19, all bets are off.  In some cases, players will be dealt to teams with financial motives, so they'll cut loose the player they just acquired.  There will be opportunities to add valuable pieces before March.

So rest and free agent help are not likely on the way until mid February.  That means this team needs to pull itself up by the bootstraps and get things right from within.  They can't wait for the cavalry to come and save them.  They aren't going to get any easy wins or nights where the other team lets them off the hook.  Celtic blood is in the water and the sharks are circling.

The starters need to set the right tone from the opening tip.  Defense has to be commited to for 48 minutes.  The bench needs to play within themselves and focus on getting stops (if they score 5 points in a 5 minute stretch but limit the other team to just 7 or even 10, I'm pretty happy with that).  And finally this team needs to close out games with a killer instinct.  No more sloppy 4th quarters.  No more taking the foot off the opponents' throat.  ABC.

The bottom line is that this team has to get right, right now.  Forget waiting for a break or an easier schedule.  All teams play 82 games.  Forget waiting for Danny to bring in someone to help.  You have to win with who you have now.  You have to survive the Winter by figuring out how to win when the chips are down.  Otherwise the Spring is going to be short lived and the Summer is going to be long and dreary.