Share All sharing options for: A Little Scal Love 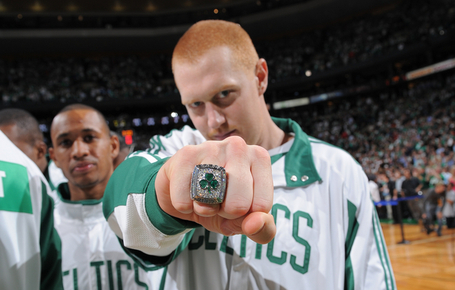 Scalabrine might as well be a cat with all the lives he's lived here in Boston.  Every time he's left for dead he pops up again.  If he's playing, chances are someone has been hurt.  If he's playing, you know that Ainge is looking around at what other options are out there.  Everyone knows this, but Scal seems to take it all in stride.

And you know what?  More often than not, when he's called upon to play bigger minutes, he doesn't let the team down.  Like a utility infielder or backup quarterback, Scal is set aside for long periods of time and then has to be sharp when called upon in a time of need.  He's been solid lately and his efforts have not gone unnoticed.

"He's been unbelievable; he was huge in the third quarter," coach Doc Rivers said.

Scalabrine scored 11 points and Leon Powe added 10 in splitting the center duties Monday. Scalabrine came out firing in the second half, scoring 8 points in the third quarter, but remained on the bench after that....

"I told him, 'That's your shot, shoot it,' " Rivers said of Scalabrine's perimeter game. "But, more importantly, he's a guy who gets deflections, he's running around on the floor. He's been great"

Good for Scal.  I'm happy to see him do well.  I also hope to see less and less of him as the year goes on because that will mean that the team is either getting healthier or they are brining in (or calling up?) someone with a better skillset.

More Scal love from the Herald:

But with Perkins out, Scalabrine plays a huge role in coach Doc Rivers’ attempt to spread those Perk minutes elsewhere.

As usual with Scalabrine, it’s the little things like defense, more than the scoring and shooting, that count right now. The fact that he’s chasing Cassell around the floor during warmups each night is starting to pay a big dividend.

“I wouldn’t be in the position I am right now,” said Scalabrine, who in the wake of Monday’s game is now 10-2 as a Celtics starter over the last two seasons.

Consider what happened Monday night when Scalabrine rotated onto Andrea Bargnani, Toronto’s perimeter-clinging 7-footer. On at least three occasions the Italian big man fruitlessly attempted to free up for a deep jumper with an up-fake. Each time Scalabrine, holding his ground, forced Bargnani to pass out of a situation where he normally shoots.

“Who in the world up-fakes more than Sam Cassell?” Scalabrine said. “He is the up-fake king.”