Share All sharing options for: Home-and-Home With Third Quarter Collapse 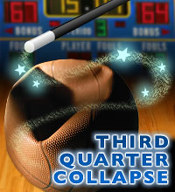 One of the nicest perks whenever the Celtics play the Orlando Magic is that the match-up provides an opportunity to chat on site with Third Quarter Collapse's Ben Q Rock.  Always entertaining and insightful, Ben Q is one of my favorites in the blogosphere.  He does great work over at TQC, and today he comes to share plenty with us about an Orlando team that looks increasingly dedicated to challenging the Celts and Cavs in the East...

[Update: My answers to Ben's questions are up over there, and Ben also chatted with Zach Lowe of Be the Three, a young but well-written Celtics blog.  Worth checking Zach's work out when you get a chance.]

SW: Let's get this out of the way early: Feel free to take as much space as you'd like below for a vintage "I'm not going to say 'I told you so,' but hold onto your seats while I say 'I told you so'" about - you guessed it - Jameer Nelson.  His play this season and your foresight have no doubt earned it.  The floor is yours.

BQR: To be perfectly honest, the only people who could have seen Jameer's rise from "competent NBA point guard" to "legitimate All-Star candidate" this year are Stan Van Gundy, Otis Smith and Jameer himself.  I've always been one of Nelson's more vocal supporters, and I thought he'd improve...but certainly not to this degree.

Put it this way: Before the season, Nelson told the press his goals were to make an All-Star team, win an NBA championship, and win an Olympic gold medal.  We kinda chuckled about those.  Now?  Goals one and two look very possible, and we can't count goal three out just yet.

Hopefully he can sustain his hot shooting. What I like about him is that, even if he's cold, he's going to take the shot if the defense will give it to him. One of the complaints I've heard from Celtics fans about Rajon Rondo is his disinclination to shoot, even if he's right at the basket, preferring instead to kick it out to a teammate. Jameer doesn't have that hang-up.

SW: Draftee Courtney Lee has gotten involved right away, appearing 36 times and averaging more than 20 minutes per outing.  Early performance review?  Where do you see the youngster progress-wise by the end of the season?  Three years from now?

BQR: Courtney is becoming a fan-favorite of sorts in Orlando.  He got off to a rough start, and I was afraid he was going to go the way of noted Magic draft busts Jeryl Sasser and Ryan Humphrey, but eventually something clicked with him, and now he's an excellent fifth option on offense. He gets his fair share of open three-pointers, and he makes them, too, which is more than anyone can say for Keith Bogans.  But what I like more than his three-point shooting is his ability to get to the rim, especially in transition. The man can finish with either hand, at any speed, over or around most defenders.  He's special.

Don't get me wrong; he's not Clyde Drexler or anything, but he's going to be in the league a long time as long as he keeps nailing the mid-range and three-point jumpers.

I haven't even mentioned his defense yet, which is probably THE thing that's going to make him stick, even more than his shooting.  I'll be brief and say this: Lee has held Kobe Bryant and Dwyane Wade to 15 points on 7-of-22 shooting in three combined fourth-quarters as their primary defender.

SW: Who would you rather face in a seven-game series - the Celts or Cavs?  Why?  Granted, the Magic may have to go through both to get through the East, but please, humor me.

BQR: It's really tough to answer this question right now, because the Magic have yet to play the Cavs this season, and they were without Jameer the first time they played the Celtics.  Tentatively, I'll say Cleveland.  Yes, LeBron might have the best statistical season of all-time, and he's without question the best player on the planet, and he could play all 48 minutes in each playoff game if he had to; yes, the Cavs look invincible on their home floor; and yes, they suddenly have offensive options other than LeBron.  But the Magic are the best road team in the league, and match up well with Cleveland. I've read in a lot of places lately about how Orlando won't get past Cleveland because it doesn't have anyone who can guard LeBron James.  Well, no kidding; no one has anyone who can guard LeBron James. That's not the issue here.

The caveat here is that the Cavs still have Wally Szczerbiak's hefty expiring contract, which could net them a great complementary player at the deadline. I'm not sure whom Cleveland would target with that trade, but the fact that they're the league's best team (their point differential is nuts) and STILL have one more chip to play is frightening. So if they do make that blockbuster move, I reserve the right to change my answer.

As for why I wouldn't want to face the Celtics, I'll just say that I think those guys will kick the intensity up a notch in the postseason. Also, Kendrick Perkins is one of the league's best "Dwight Stoppers," meaning they can afford not to double-team him. Fewer wide-open three-pointers for Orlando means fewer chances to win.

SW: Tell me one thing the rest of the country doesn't know about the Magic that it should.

BQR: There's been a huge spike in Magic coverage recently due to their unexpectedly having the league's best record at the halfway mark, so what I'll say isn't as much a secret now as it was, say, three weeks ago, but here it is: Stan Van Gundy is one of the best coaches in the league.  When people talk about the Magic, they talk about Dwight Howard, Jameer Nelson, and the plethora of lethal outside shooters they have.  That's understandable, but let's not lose sight of the man who has implemented the system that allows these players to thrive. I don't think he gets enough credit for the job he's doing (although he would say otherwise, I'm sure).

David Thorpe of ESPN mentioned this in one of his recent chats, but it bears repeating: Hedo Turkoglu won the Most Improved Player award last year, and Jameer stands a decent chance of winning it this year.  What does that say about Stan's coaching acumen?

SW: Score prediction for the game?

BQR: Way to put me on the spot, Steve. It's hard to pick against either team right now, but I'll go ahead and pick the Magic to win, 97-94.

Much thanks for coming aboard today, Ben Q.  You're welcome here anytime.  Good luck to the Magic and their fans...when they host Cleveland next Thursday.

And good luck tonight, too, just not too good.  Go Celts!