Share All sharing options for: Game Of The Year! (Take 3) 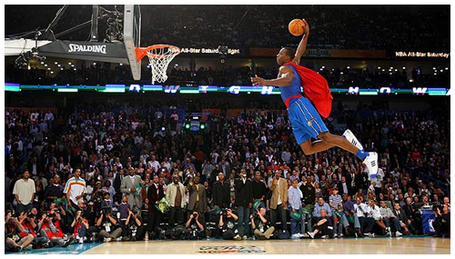 [Flashback] Christmas Day!  Finals rematch!  Rivalry renewed!  The unquestioned number one team in the world and defending Champion Celtics take on their rivals the Lakers in a clash for the ages!  The Celtics enter the game on a 19 game winning streak!  I can't stop using exclamation points!  Then... the game started. Thud.

[Flashback 2]  January 9:  Riding a 3 game losing streak, the Celtics limp into Cleveland.  Still, we are the defending Champs until someone knocks us off.  We beat the Cavs last year on our way to the Championship and we can do it again.  LeBron James is playing out of his mind, but 3 is still greater than 1 right?  People are jumping on the Cavs bandwagon and calling them the best.  If we win this game, we make a statement that says "don't count us out just yet."  Then... the game started.  Splat.

Funny how those two games served as bookends to our bad stretch. The Lakers knocked us off balance and the Cavs woke us up.  Now the team is rolling again and it is time for another test.  How will the team respond?

Orlando is now considered the best team in all the land (according to various power polls).  They are riding a 7 game winning streak (so somebody's win streak will end tonight) and they just got back from a West Coast trip that went considerably better than ours did (including wins over San Antonio, the Lakers, and Denver).  They haven't played since Saturday, so they are either well rested or rusty, but either way they've had plenty of time to game plan for the Celtics.

Meanwhile the Celtics are starting to roll themselves.  They haven't just been beating teams, they're blowing them out.  They have been setting the tone early and seem to be getting back to the basics of defense.  They've had a few days to rest between games and even though this is a back-to-back game, they know they have 2 days off after this.  So no excuses.

It seems like eons ago, but the Celtics did beat the Magic earlier this year.  Pierce lit up Hedo and Rashard for 17 points in the 3rd quarter alone and the Celtics cruised to a 19 point win.  However, don't count on the Magic rolling over like the Nets or the Suns did this week.

Jameer Nelson is playing the best basketball of his career, Howard just had two 20 rebound games in a row, and the team set an NBA record by hitting 23 three pointers against the Kings.  Oh yeah, and they (like every contender) are hungry to knock off the Champs.

"They’re a great team. We’re a good team," said Nelson, the Magic point guard. "We’re trying to get to where they are."

This may not be the biggest game of the year, but it is a big game.  This is our third shot at making a statement.  The top contenders always want to knock off the Defending Champs.  It gives them the confidence to believe that they can defeat us when it matters in the playoffs.  As defending champs, it is better to knock these teams down a peg and place that seed of doubt in their heads.  So far the Celts are 0-2 in that regard.  They get another shot at it tonight.

Are the Champs back on track?  Or are the contenders really passing us by?  We'll see.