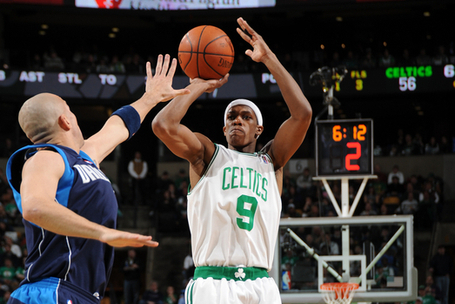 A lot of talk is centered around Rajon Rondo this year, and for good reason.  We have gotten over the initial euphoria of getting 3 potential Hall of Famers on the same team and on the same page, sacrificing their individual games for the goal of a Championship.  In fact, we almost take those 3 guys for granted now.  We know what we can expect from them and it is in fact a surprise when any of them goes through any kind of mini-slump.

Rondo on the other hand is still fresh and new to us.  He's still coming up in the world yet he has a tremendous impact on the outcome of the games.  If he is playing well, you can bet the team is playing well.  When he struggled for a few weeks around Christmas, clearly the team had trouble overcoming that.

And of course by now everyone is aware that Rondo's Achilles heel is his jumper.  Teams have started game planning the Celtics by backing off and leaving Rondo to roam on the perimeter.  They dare him to shoot and early on he simply didn't.

Lately, however, he seems to be accepting the challenge and has started taking and making a few more shots.  He's never going to be a Ray Allen or Eddie House, but if he can at least make a 15 footer, he'll keep defenses honest and off balance.

The main point of this post (sorry that it has taken me 5 paragraphs to get to it) is to bring to light a trend that was first noticed by Justin Poulin of CSL.  Rondo shoots the ball better off the dribble than he does in a catch-and-shoot situation.  The numbers bear it out.  We consulted an NBA scout and he confirmed that Rondo's catch-and-shoot percentages are horrendous.  However, his shooting off the dribble is very respectable.

Clearly this has something to do with his comfort level.  Rondo has a knack for keeping his dribble alive even under heavy pressure, something that sets him apart from the average point guard.  He's clearly comfortable moving with the ball in his hands.  It only makes sense that he would feel a better flow shooting off the dribble.  Put him in a situation where he's spotting up in the corner, with time to think about making or missing the shot and I can see him tightening up.

An additional trend I noticed (but don't have any evidence to back up) is the fact that he seems to make shots at the end of quarters and at the end of the shot clock.  My theory is that it has something to do with pressure.  If the shot clock is winding down, he knows that the team has run out of better options and needs to put the ball up or lose the possession.  He's essentially got nothing to lose.  So when it goes up, it is a free shot.  Almost like a quarterback dropping back when he knows the defense jumped offsides.

Clearly he's not a great option for the end of games, where the pressure ratchets up.  However, putting the ball in his hands (like Doc does often) at the end of quarters is a good idea because he can beat his man off the dribble and either set someone up or take the shot (or layup if it is there) himself.

As Sean Grande often points out, Rondo came into the league with all the wonderful skills that you can't teach point guards.  He's learning and developing the skills that you can teach.  If and when he develops his jumper, the debate will end about his All Star chances.

Speaking of which, since I posted my article on Rondo's All Star chances, there have been a few more entries.  Feel free to peruse them after the break.