Thanks For Playing, Scal

Share All sharing options for: Thanks For Playing, Scal 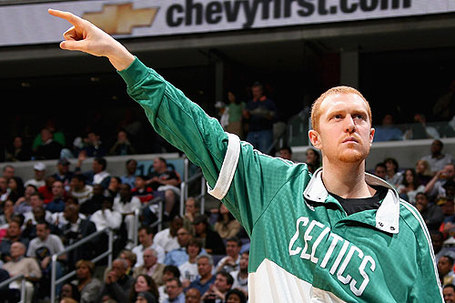 Sunday evening's game classified as a throwback game of sorts for me.  It provided a chance to experience a feeling I haven't met since 2006-07: embarrassment.

The last season and change have for the most part been a dream for Celtics fans, so there haven't been too many negative emotions in the first place.  But there's been some agitation and some frustration along the way as is probably healthy for every long-term experience.  The early struggles in last year's playoffs likely made the ultimate prize that much sweeter (though I still would have preferred better coronary health during those first two series).

Maybe it has to do with my previously discussed sentiments about the Knicks and how badly I want these games. Perhaps it was the sight of Al Harrington running around with his tongue hanging out of his mouth after another three-pointer.  Watching the notoriously foolish Quentin Richardson keep jawing despite a 1-for-13 shooting night didn't help.  Or maybe the sort of effort the Celtics put out last night would have done it to me no matter the opponent.  Whatever it was, embarrassment is the only word that does this one justice for me.  I can't remember the last time that I sat in the comfort of my own den with no opposing fans around and felt my facial temperature skyrocket and my cheeks burn because of the way this team played.

Losing to the Knicks and losing games in which our boys seem to have no energy as a unit bring out the worst in me.  It is particularly fortunate for me then that Jeff covered the feel of this one more than amply in his game recap (as he always does), so we can forgo a Babble full of overreaction and me saying things I'll regret about Glen Davis (on my last nerve at the moment), Tony Allen (The Guru says, "Get him a MENSA application"), the Gabe Pruitt minutes situation (whatever) and with perhaps three exceptions, just about everyone else who physically showed up in green yesterday.

Nope, none of that today.  You're going to get tired of hearing me say this, but this isn't the time yet.  The absolute-no-holds-barred-pull-no-punches flipout is best used sparingly (or its value depreciates), and there is a time (or a few) for it during each season.  But as angering as last night was, we've all got to pick our spots.  This isn't one of mine.

So instead, now that we've spent half this piece telling you what we won't be talking about today, a few notes on one of the few Celts who did bring some New Year's cheer on Sunday night: Brian Scalabrine.

Yes, Scal missed two open threes from the left corner that could have given the Celtics a lift and helped keep them in the game late in the fourth. Not my preference, but it happens.

But the redhead also came off the bench in the second half to provide some of the Celtics' best defensive effort of the day.  It was torturous to watch Al Harrington murder the Celtics' bigs throughout the day.  None of the starters were particularly effective against him, but the Infuriated Infant was an especially large disaster when matched up with Magic Al.  Glen Davis didn't have the speed to hang with Harrington (11-of-23 for the game, 5-of-9 from deep, 30 points) on the perimeter or the length to deal with him inside.

But Brian Scalabrine had no such problems.  Scal did just what he was supposed to do when he got his chance against the Knicks' spark plug big man off the bench.  He moved his feet, kept his man in front of him and challenged every shot.  On the one play when Scal did let Harrington beat him to the basket, he stayed with the play and came up the right baseline to block Harrington's lay-up attempt from behind.

I'd be lying if I said I had always been Scal's biggest fan, and it seems at times that his on-court intangibles values are overblown (I wouldn't know enough about what goes on in the locker room, though he seems to be a good-natured guy, and I've never once heard a bad word about him as a teammate).  Last season more than this one, it seemed that Scal received credit for such traits as rotating well defensively and "understanding the system" more so because there was so little that could be positively said for the rest of his game than because it was at all evident that he actually did those things.

While I'm not entirely sure of my feelings about Scal's play this season (a big part of why I've resisted about writing about his performance on the whole this year, though I've felt less frustrated with him on the court), there was a lot less uncertainty than usual last night.  For his 12 minutes on the court, despite the two big misses on the perimeter, he was a positive presence.  He made Al Harrington work for every shot, holding him to two points for the fourth quarter and five for his time on the court for the day.  He didn't commit silly fouls, and he was constantly in the right place to frustrate one of the two Knicks who truly torched the C's (Wilson Chandler being the other).

Most of the Celtics (with apologies to Paul Pierce and Leon Powe) settled for showing up in body and little else.  Brian Scalabrine came to work on Sunday night in the Sizable Apple.  Thanks to the redhead for providing a rare bright spot for the evening.