I'm On A Plain, I Can't Complain

Share All sharing options for: I'm On A Plain, I Can't Complain 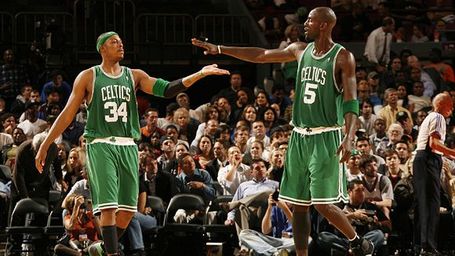 You know, I was pretty bummed out about the Knicks game.  Put together with the recent road trip it puts us in an actual slump.  I mean, in the span of a couple weeks we tripled our loss total for the year.  But that's a glass-half-empty way of looking at it.  The glass-half-full view is that we're 29-6.  That's still on pace for 68 or so wins (2 more than last year).

So maybe we should take a cue from the players.  When they were busy winning 19 games in a row, they were pretty confident and they had some swagger, but they never really made a big deal about the records they were breaking.  It didn't matter too much to them.  Now that they have hit a slide, they understand there are issues to work through and things they need to work on, but they aren't getting too down either.

From the Steve Bulpett article:

They’re saying nothing major is wrong, that they just have to clean up a few things here and there. (Judging from the road troubles, it’s mostly “there.”)

“We talked about it as a group afterwards and I think we’re all in the right place,” Ray Allen said. “It’s just small little things we’ve got to do when we’re out there and just be good together as a unit. Simple as that.

That even keeled response is the kind of veteran attitude that this team needs to defend it's title.  They know from experience how tough it is to win a Championship.  They know the season is long and there will be peaks and valleys along the way.  The key is to never get too high and to never get too low.

At the beginning of the year I felt the team would lose a few more games due to the loss of James Posey and needing to expand the roles of some of the bench players.  They started out faster than I thought but perhaps we are seeing a market correction of sorts.  Water seeks its own level and by the end of the year teams typically end up with the record that they deserve (barring injury).  At the end of the playoffs, I still expect to see the Celtics celebrating once again.