Share All sharing options for: Maybe Rondo Should Shoot More

Henry Abbot pointed out that Rondo has been taking most of his shots right at the rim this year.

Rondo is shooting a brilliant 52% this season, as good as any point guard. How can you leave him open? A peek at NBA.com's hot zones reveals he has made 127 of his 205 shots at the rim. Everywhere else on the floor, however, he is a miserable 23 of 85. 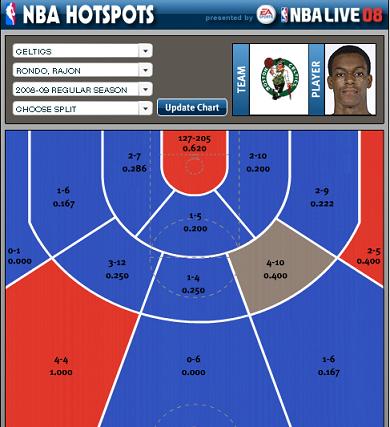 A follow up post has a link to blog (Be The Three) that points out that Rondo shot from the outside much more last year.

As a Celtics fan, I was curious. I remembered Rondo hitting jump shots at a decent rate when the Lakers (and other teams) tried the same defense on him in the playoffs last year. I went to NBA.com's hot spots, and found out I was right. During the playoffs, Rondo shot 55-for-133 at the rim and 53-for-131 from everywhere else on the floor, a much more even split. Most important (from the perspective of a Celtics fan, at least), Rondo made 31 of 63 long two-point attempts--almost exactly half. (The trend was the same in the regular season, too. Per 82games, Rondo took 44 percent of his shots from inside last year, compared to 60 percent this year).

Point being: he can make a 15- to 20-foot jumper, and I think he should be taking those shots.

Its all about confidence.  If he has the confidence to shoot them, he'll make enough of them to make the defenders think twice about leaving him wide open.  The only way to get that confidence is to start taking those shots in the game (and note to Doc: let him take the shots without benching him if he misses a few).